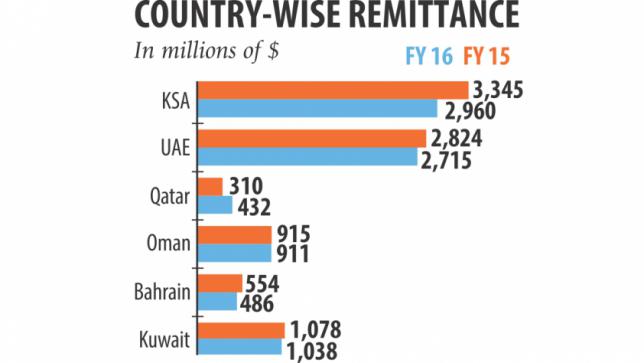 Mizanur Rahman, a mason at a construction firm in Saudi Arabia, is worried about losing his job. His employer has recently expressed inability to continue some of the ongoing projects due to financial crisis.

The lone breadwinner of a five-member family from Faridpur cannot even begin to imagine what would happen to his family if he loses the job.

“We are not getting our wages for the last six months. We are still working for the company, hoping the situation would change soon,” said Mizanur, who has been working for Saudi Oger, one of the largest construction firms in Saudi Arabia, for around four years.

“But there is no sign of improvement… Rather, our employer has told us that he may suspend some of the projects for fund crisis,” the 40-year-old migrant worker told The Daily Star over the phone from the kingdom yesterday.

Earlier, Mizanur used to work overtime for around 20 to 25 hours a week to earn extra money. But now he doesn’t have the opportunity.

The company suspended the facility around seven months ago when it began to face financial crisis due to the fall in prices of oil, the lifeline for the Saudi economy.

“Every month, I used to earn Tk 40,000 including my wage and overtime payments. But now I get only the monthly wage of Tk 28,000 which is not enough to meet my needs and send money back home for my family,” he added.

Mizanur is among thousands of Bangladeshi workers, who are facing the same crisis in Saudi Arabia and other Gulf countries.

Coupled with conflicts in the Middle East, falling oil prices have affected the Gulf economy for the last one year. And the slowing economy is signalling bad days ahead for the migrant workers from Bangladesh and other South Asian countries, who send home the much-needed remittance.

If the situation gets worse, it may lead to job losses, non-payment or low wages, low remittance, poor living condition and shrinking of Bangladesh’s overseas labour market, say experts and migrants.

Around 16,000 South Asian migrants, including 1,500 Bangladeshis, were not paid for the last eight months by Saudi Oger, show recent reports by global media outlets.

Many countries of origin of migrant workers have already stepped up efforts to evacuate or arrange alternatives for their stranded workers, who are also suffering from food shortage and deteriorating living condition.

The worrying picture started to emerge, as remittance from the Middle East declined in the last fiscal year despite an increase in overseas jobs. It was because real income of the migrant workers is on the wane.

Remittance slipped 2.54 percent year-on-year to $14.93 billion in fiscal 2015-16 though outflow of migrants jumped more than 62 percent to 6.84 lakh during the same period with the major flow of migrants to Oman, Qatar, Saudi Arabia, the United Arab Emirates, Bahrain and Lebanon.

During the fiscal year, $8.55 billion of remittance came from the Middle East countries, down 5.17 percent year-on-year, according to the Bangladesh Economic Review.

“This is a matter of concern,” said former Ambassador Ashfaqur Rahman, chairman of the Centre for Foreign Affairs Studies, referring to the situation in the Gulf, home to some four million Bangladeshi workers who send home about 60 percent of some $15 billion remittance a year.

WHY IS THIS HAPPENING?

Saudi construction firms have been among the hardest-hit due to lower oil prices that have curbed and sometimes delayed government spending on major infrastructure projects, media reports say.

Construction contracts shrank by about 65 percent in the second quarter this year from the same period last year, reports Bloomberg, referring to data published by Jeddah-based National Commercial Bank.

Construction companies don’t have the money to meet their commitment to employees, John Sfakianakis, director of economic research at the Gulf Research Centre, told Bloomberg.

According to the International Monetary Fund, oil-exporting countries in the Middle East have lost $390 billion in revenue due to a dip in oil prices since last year. The amount would be as high as $500 billion by the end of this year.

Talking to Indian magazine Caravan recently, IMF Director for Middle East and Central Asia Masood Ahmed said these losses translate into budget deficits and slower economic growth, particularly for countries such as Saudi Arabia that are still heavily dependent on oil to finance their spending.

The gloomy picture emerges in the wake of the Syrian civil war, which spilled over into neighbouring Iraq, Lebanon, Jordan, Yemen and Libya, making the entire region unstable. Hundreds of thousands of people left the troubled areas and took shelter in neighbouring Arab countries, putting an extra burden on the public spending of those countries.

Hanif Mia, a Bangladeshi graphic designer in Riyadh, said the real income of migrants was waning while the prices of commodities and costs of public services were going up.

For example, foreign workers’ annual iqama (residency permits) renewal fees went up to 2,400 Saudi Riyals (SR) from SR 700. It has put a burden on private companies that largely rely on foreign workers.

Many of the companies are passing the fees onto the migrants, who now don’t find it beneficial to work in Saudi Arabia, he noted.

As part of efforts to offset the oil price shock on the international market, the Saudi authorities hiked oil prices on the domestic market.

With a monthly pay of SR 1,200, a migrant worker could manage a plain living for SR 300 two years back. But now he needs more than SR 700, which drastically reduces his real income.

Sarwar Alam, labour counsellor at the Bangladesh Embassy in Riyadh, said some big business firms face difficulties in operating in that country, and they have been advised to suspend projects involving thousands of foreign workers.

“There is a possibility that foreign workers will face tough situations if the economic condition remains unchanged,” he told The Daily Star.

Jahed Mostofa, a Bangladeshi businessman in Riyadh, said many employers were failing to pay wages to migrant workers.

“Some employers are also encouraging the workers to quit jobs and return to Bangladesh,” he told this newspaper over the phone recently.

Former ambassador Ashfaqur said the economy is struggling more or less in all the Gulf countries, except for the UAE that diversified its economy beyond oil.

“Even the quality of life of those doing white-collar jobs is deteriorating,” he said, referring to his conversations with his relatives in Saudi Arabia.

The situation in the Gulf would worsen unless the conflicts in Libya, Syria and Iraq are resolved, noted Ashfaqur.

Now that there is a refugee crisis in Europe, it is unlikely to take migrants, he said, suggesting that Bangladesh should find new labour markets.

“Why not look to South America, Japan or China for better options?” he said.

The foreign affairs expert recommended improving the skills and qualification of Bangladeshi workers so they can work as professionals in technical, education and health sectors.

Aakash Jayaprakash, former migrant worker welfare specialist at Qatar Foundation, said if opportunities in the Gulf shrink, there would be opportunities elsewhere.

“The challenge rests with the governments in countries of origin and destination to take the necessary steps to ensure protection of the most vulnerable in society,” added Jayaprakash.