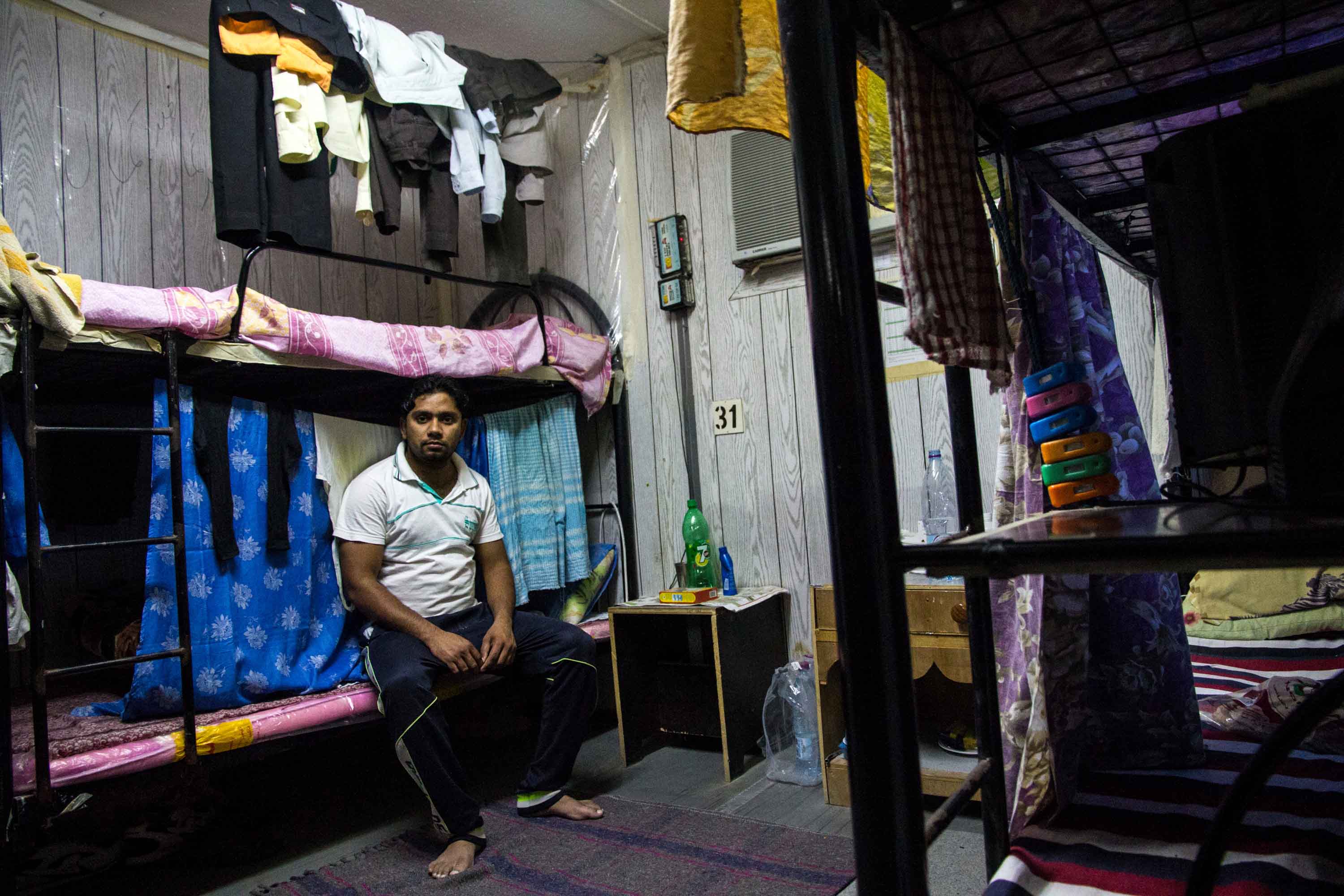 Building a dream, living in hell

By Pattabi Raman
No comments

“Qatar deserves the best”. That is the slogan on boundary boards along important roads in and around Doha, the capital, with a population of 1.7 million. It ranks as the world’s richest country per capita thanks to its natural gas reserves, the third largest in the world.

The country is preparing for the 2022 FIFA World Cup, which means a massive construction boom. As the Qatari citizen won’t do the manual labour, tens of thousands of migrant labourers have taken up the burden. That has opened it to serious accusations of human rights abuses. Even FIFA tacitly admits it, and its embattled president Sepp Blatter confessed that he could do nothing about that.

The World Cup doesn’t wait, however. Even in this unforgiving weather, where temperatures reach 45 degrees, you can see migrant workers slaving away. Dark glasses and reflective vests are ubiquitous.

Every tenth vehicle on the road is a bus that carries migrants to and from work and every third person you meet is a migrant from South or Southeast Asia. Nepali, Indian, Sri Lankan, Bangladeshi, Filipino, Pakistani and Egyptian—this is the hierarchical order of the migrant population. On average, 15 people enter Qatar at any given hour. It is estimated that there are more than 1.3 million foreign nationals working in the country.

Madu has got his Bluetooth stereo headset on and is listening to Bollywood songs. “The pick-up vehicle will arrive at 3 a.m. and we will be back around 6 p.m. Our average sleep time is less than five hours. The system in Qatar is different from home. A worker is owned by his employer who makes you work overtime,” says the engineering diploma holder who is a project supervisor.

Rangan, a Sri Lankan Tamil, migrated to Qatar in 2006 during the civil war. The war-torn economy and failed agriculture left him with no choice. He earns 600 Qatari riyals (about $170) as a janitor. He hasn’t had an increment in all these years. “My pay has only increased by a few riyals,” he says. Rangan is accompanied by Stephen, a Kenyan, who says he paid a large sum of money to an agent to get a job. He says he has not been paid the promised salary.

Many migrant workers face problems with non-payment of salaries. There’s no one they can turn to either, apart from their employer who is the cause of the delay in the first place. Prolonged delays or non-payment are not only abuses, but leave workers unable to pay for food or send money home. In addition they have almost invariably taken loans at high interest to pay agents up front.

Most labour camps are on the outskirts of Doha, some of them almost 50 kilometres away. At first sight, a camp looks like a scene of effortless integration. There’s a busy market, a mosque, a large Pakistani mess, a big kitchen, a volleyball court, a clinic, a browsing centre, and a row of bunker rooms. There’s great bustle on Fridays as people get ready for the noon prayer, and a few others to go to Doha to send money to their families. A group of men are busy playing video games and listening to Hindi songs.

Soudakar hails from Tamil Nadu’s Kanyakumari district. He is about to return, just weeks after recruitment. Soudakar was promised a job as a civil engineer but was made to work as a casual labourer. The job was supposed to be in Doha city but he found himself working in a remote area bordering Saudi Arabia.

“We have to wake up at 2.30 a.m. and slave for more than 13 hours. If we take a day’s leave, they deduct two days’ salary. If it’s three days, then you lose a week’s salary. Around 16 of us were in a 4×4 room in a camp some 45 kilometres from Doha. Migrants are forced to work excessively long hours and are subject to unlawful wage deductions if they miss work.”

Another sore point for migrants is that the job rarely fits the promise made at the time of recruitment. An experienced driver might find himself working as a janitor even though he was promised something else while signing the contract. Every migrant worker in Qatar needs a “sponsor” who must also be his employer. Workers cannot change jobs without the sponsor’s permission. They cannot leave the country as the sponsor holds their passports.

“So you have to work like a dog here to make money, right? No, no, not like a dog, like the devil,” says Mufareesh, a Sri Lankan national who works as a supervisor in Doha.

“Our home countries as well the country in which we work benefit financially from our labour and the remittances we send home,” he continues. “It’s a pity they can’t see we’re human beings like them. Our governments see just an ATM when they look at us.”