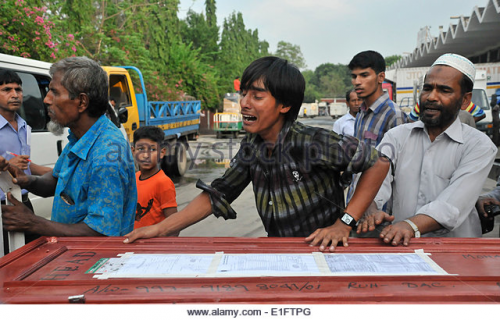 By Morshed Ali Khan
No comments

Bangladeshi migrant workers experienced the worst year in 2017, with around 3,500 dead bodies sent back from different countries, the highest number ever in a single year.

Most of these migrant workers who died due to “heart attacks and strokes” were between the ages of 30 and 45 — an unlikely age to have such ailments, medical practitioners say. But contradicting the claim statistics shows about 45 percent of the workers die from workplace accidents. Saudi Arabia sent back the highest number of bodies according to government statistics. An estimated seven million migrant workers from Bangladesh are working all over the affluent countries in Asia including the Middle East.

Many of these helpless workers are victimised in a complex procedure of migration. When their bodies are returned home, their shattered families hardly receive any compensation. The Bureau of Manpower, Employment and Training (BMET) sources in Dhaka said every migrant worker must obtain permission from its office before going to work in a foreign country. Otherwise the family of the person, if dead, does not qualify for an automatic compensation from the government. Thousands travel to various destinations on tourist visas and choose to work there totally undocumented. Then there are thousands who on arrival in a country with valid papers do not find their jobs not as promised. With their passports and other documents deposited with the initial employers, they escape to find better jobs and become undocumented.

“Many of these poor men and women leave the country for working abroad paying larger amounts of money compared to migrant workers from other countries in Southeast Asia, but they end up being undocumented due to a sloppy system,” says a BMET official, requesting anonymity.

When a documented person’s body arrives, the Bangladesh government pays Tk 35,000 for burial, and then a compensation of TK 3 lakh.

Sharikul Islam, chairperson of Ovibashi Kormi Unnayan Program (OKUP), an NGO working for the welfare of the migrant workers, told this correspondent that it might take up to eight months for the families to get any compensation.

People involved in the manpower business say this death toll can be drastically reduced if the hidden migration costs are cut. For instance, the government has set an amount of Tk 1.65 lakh (US $1,600) for a person to pay for going to Saudi Arabia. But invariably the would-be migrant is milked for up to Tk 6-8 lakh. This is mainly due to exploitation of the workers in the recruiting process. This unscrupulous practice is applied for all other destinations too, putting the migrant in a desperation to recover the extra cost by looking for more lucrative jobs or by taking up additional ones.

All the recruiting agencies are situated in Dhaka. If someone wishes to migrate from an area in Rangpur, the person has to get hold of a local middleman. That middleman gets to another middleman in Dhaka or in the district town.

“By the time the would-be migrant’s case reaches a recruiting agency, the person has already spent several lakh taka,” says Sharikul. “And the poor aspiring migrant’s fund probably comes from borrowing or selling his last piece of land.”

There has never been a government initiative to look into the mysterious deaths of the hundreds of migrant workers.

Sharikul Islam emphasised on the need for investigations of the deaths and said there were many reasons why so many were dying.

“In most cases these men and women live in appalling conditions in the destination countries, their workplace conditions are also very demanding,” he added.

Interestingly, some of the families are still not sure how their dear ones died. Sultana Begum 28, from Faridpur used to work in Lebanon as a house-help. Her younger sister Jhanu Begum told reportsbd.com that they had spoken with her two hours before she expired on September 2, 2017.

“She told us that she was readying herself to come to Bangladesh on a holiday and she sounded quite normal,” Jhanu Akhter said adding that later the same day they were informed that Sultana died of a viral fever. “We could never believe that.”

Amena Begum lost her husband Sumon Hossain 29, in October, 2016, who had paid Tk 4.5 lakh to migrate to Lebanon on a work visa.

“In the certificate my husband’s cause of death was noted as ‘heart failure’, but we heard from his Bangladeshi colleagues that Sumon suddenly died of some other ailment,” she said.

Amena, who now works in a garment factory in Narayanganj, said when Sumon’s body arrived in Dhaka, she did not know what to do. “It was an NGO who told us about the compensation that we could claim.”

“The government is not at all alarmed by the deaths of thousands of its citizens while working abroad, they (government) tell us that it is quite normal with millions working overseas,” Sharikul adds.

(Originally published in the reportsbd.com.)