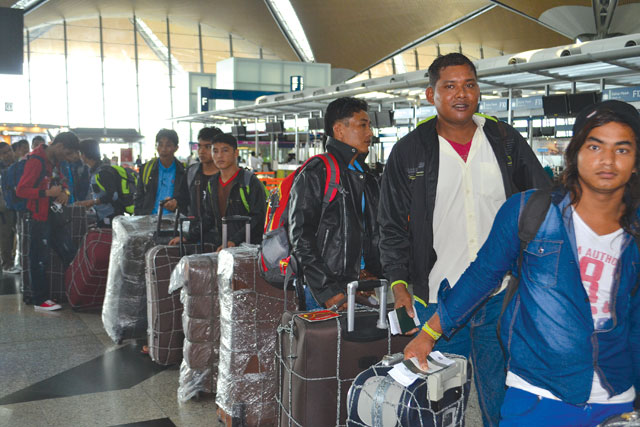 Hounded out of Malaysia

After getting his boarding pass for a Kathmandu-bound plane, Basanta Basnet, 22, looked relaxed at Kuala Lumpur airport last week. He was going home after four years in Malaysia. When asked if he plans to return, he replied firmly: “No way.”

Basnet is from Dang district, and was only 19 and newly-married when he first went to work in a poultry farm in Pedas in Malaysia. From the beginning he was often beaten up and robbed by local Tamils. The last straw was when a fellow-Nepali worker was beaten to death by a local youth when he resisted a robbery attempt.

“We could not save him, but we collected money to send his body back to Nepal,” he said.

Nepalis are preyed on not just by jobless young Malaysians, but also by employers. Last month, when a few chickens died in the farm, Basnet was stripped naked in front of co-workers. “He would cut my pay every time I made a mistake, but this time he humiliated me,” he said.

Unable to bear the abuse, and constant threats from the locals, Basnet decided to return – together with 27 others in the poultry farm. “Malaysia is a jungle and we were the easy prey, the locals are always hunting for us,” he said.

Exploitation, an increase in the Malaysian government levy on worker’s earnings, a falling Ringgit and a temporary ban on foreign workers are some of the reasons why the number of Nepalis going to Malaysia has plummeted. But in interviews last week with Nepali workers here, another reason became apparent: robberies and beatings by locals.

Every second Nepali interviewed said he has been robbed or repeatedly harassed on the streets. Shyam Bahadur Thapa from Parbat was on a recent flight to Kathmandu, he had been robbed so often that he decided to return to Nepal after five years. But on the day before his flight, while waiting for a ride to the market to buy presents, he was robbed again of his savings. “I am never coming back. Malaysia is hell for Nepalis,” he told us.

Prem Magar of the Nepali trade union, GEFONT, in Kuala Lumpur says most Nepalis are weak and vulnerable, and never seek police help. “We don’t go to the police because of the fear of more harassment, and the Nepal embassy is powerless to protect us,” he said.

Magar has been working at a factory in Klang near Kuala Lumpur for six years, and has seen many of his friends robbed and beaten by locals. “Nowadays, we only travel in groups and we never retaliate, because if we do we get deported,” he said.

Nepal’s ambassador to Malaysia, Niranjan Man Singh Basnyat, says his embassy has started a hotline service to help Nepali migrant workers, but admits that they rarely call the embassy when they are robbed.

“It is useless to call the embassy for help,” says Keshav Khadka, another plastic factory worker in Klang who remembers submitting a petition at the embassy after a Nepali worker was brutally assaulted two years ago. “The embassy could do nothing,” he told us.

Nepali workers are more vulnerable to abuse and harassment in areas like Pedang and Johor Baru. They even get harassed by police who frequently check them for documents.

“Our earnings have fallen because the value of the Ringgit is still low, and the labour levy is increasing,” says 35-year-old Anil Chaudhary, one of the 150 Nepalis working to build an under-ground metro rail network in Kuala Lumpur. “But whatever little we earn is also not safe from robbers.”

The Malaysia government has increased minimum salary of migrant workers to $249 effective from July, but it has also raised the labour levy.

G Rajasekaran, General Secretary of Malaysian Trade Union Congress (MTUC), says: “The Malaysia government is forcing employers to pay more to migrant workers so they can collect more taxes from them.”