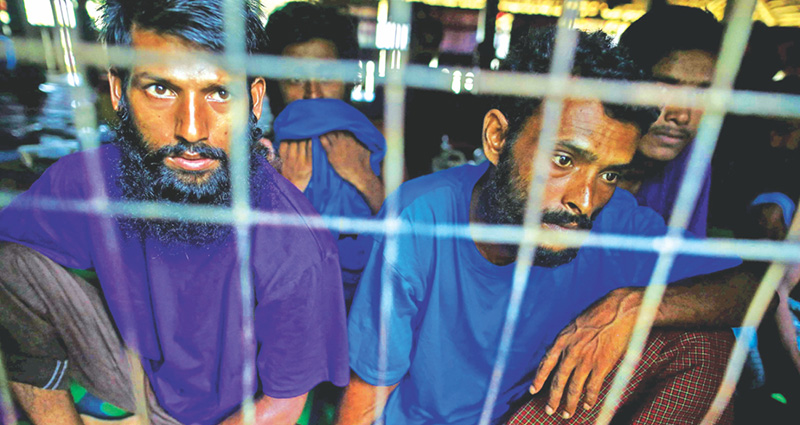 Jobs in Malaysia III: For sound hiring system, onus is on Malaysia

t has always been mutual: Malaysia needs workers, and Bangladesh has plenty of them. That’s why, Malaysia, after Saudi Arabia, has become the second most sought-after destination for Bangladeshi job-seekers.

Given this, a transparent system for labour recruitment could have dismantled the human trafficking chain and also saved the lives of hundreds of migrant workers. But why the two countries have so far failed to devise one such mechanism? In the last part of a three-part series, The Daily Star focuses on Malaysia’s dubious recruitment policy.

Malaysia has always acted mysteriously when it came to hiring workers from Bangladesh.

Though several lakh Bangladeshis work in the Southeast Asian country, it never put the country on its list of labour source countries.

Since 1992 when Malaysia started recruiting workers from Bangladesh, it always allowed the private sector businesses, except for once, to do this job with little or no government monitoring.

This paved way for some money-monger manpower agents and a certain quarter of government officials to fatten their pockets by hiring a lot more people than required. As a result, a huge number of migrants would remain jobless and inevitably in utter miseries.

And when reports of jobseekers being left in a quagmire of plights would come out, the country would simply slap a ban on hiring from Bangladesh. Such bans came thrice already — in 1997, 2001 and 2009.

The only exception to this happened in 2012 when the two countries signed the government-to-government (G2G) labour recruitment deal. The system, however, has already collapsed following massive lobbying from private sector.

BLOW AT THE BEGINNING

Following the adoption of an industrialisation policy in 1970, Malaysia started looking for cheap foreign labour to make its economy competitive. In this trend, it formally began recruiting from Bangladesh in 1992.

However, it never had a stable and comprehensive policy to protect the rights of migrant workforce, experts say adding that Malaysia’s way of handling Bangladeshis has been particularly dubious.

In 1995, Malaysian human rights body Tenaganita published a report uncovering evidence that 59 inmates, mostly Bangladeshis, had died of typhoid and beriberi in an immigration detention camp.

Later in a statement, Asia Director Brad Adams of Human Rights Watch said the abuses included random beatings in the middle of the night, HIV/AIDS detainees sleeping on a roofless porch, unprotected exposure to rain, sun and filth, food and water shortages, and inadequate medical care.

When the Malaysian government started thinking about lifting the ban, the employers said they wanted to recruit foreign workers through their representatives in order to save time and money.

In 2005, Malaysia introduced a new policy of outsourcing and lifted the ban in 2006 on condition that Bangladesh send workers through outsourcing companies.

The Malaysian home ministry issued licences to 223 outsourcing companies that were responsible for recruiting and managing Bangladeshi workers and supplying them to the principal companies.

Under this system, the principal companies had to bear no responsibility for the workers.

The employers could directly hire from Bangladesh only if the number of workers was more than 50, the then principal assistant secretary Encik Ayob Abdul Rahman of Malaysian home ministry had told a discussion in Kuala Lumpur on July 10, 2007.

“Those who were issued licences were closely connected to the ruling party leaders,” he told The Daily Star by phone.

And how big was the business? Former Malaysian home ministry official Abdul Rahman himself gave an estimate.

“Although the employers do not need workers, they are promised some amount of money [in bribe by Bangladeshi agents]. It is … a very high amount. From RM500-RM2000 per worker. If a company recruits 100 workers, you can calculate how much the human resources manager can get,” he had told the 2007 discussion organised by Malaysian Bar Council and Tenaganita. The Daily Star has obtained a transcript of the programme.

Not only agents and employers, certain quarters of the Malaysian government officials were involved in this nefarious nexus as well.

The then immigration director general of Malaysia — Datuk Wahid Md Don — was found guilty of accepting RM 60,000 in bribe for approving 4,337 visa applications of Bangladeshi workers on July 10, 2008.

Later in October 2013, the official was sentenced to six years in prison and fined RM 300,000, according to Malaysian media reports.

More than four lakh Bangladeshis went to the country during that period and many of them did not get jobs. They’re often kept confined or made to work with low pay or none at all. Thousands of them were deported penniless and sick.

Following widespread media reports on the abuses, Malaysia cancelled visas of 55,000 Bangladeshis and froze recruitment from Bangladesh in March 2009.

G2G AND ITS FAILURE

After nearly a four-year gap, Malaysia and Bangladesh introduced government-level arrangements for recruitment in November 2012, but mysteriously only some 10,000 workers were recruited in almost three years.

Amid this near-stalemate in overseas recruitment, a large number of poor Bangladeshis and persecuted Rohingyas of Myanmar took risky sea journeys to reach Malaysia.

Mass graves were discovered on the borders of Malaysia and Thailand in May, triggering a whirlwind of criticisms across the world.

B2B IN THE OFFING AGAIN

Against this backdrop, Malaysia in June announced that it would recruit 1.5 million Bangladeshis in the next three years, but under private management, commonly known as business-to-business (B2B) system.

This triggered severe criticisms from different migrant rights bodies and trade unions in Malaysia itself.

“Brining in new migrant workers [under B2B] will only benefit those who are given approval by the authorities and the labour agents and suppliers,” said Dato’ M Ramachelvan, chairperson of migrants, refugees & immigration affairs committee of Malaysian Bar Council.

BANGLADESH NEVER MADE A SOURCE COUNTRY

Malaysia recruits foreign workers on a regular basis from 12 countries, known as source countries, but Bangladesh was never put on the list.

So, employers need a special approval from the Malaysian home ministry if they want to hire from Bangladesh.

“And it’s certain that an employer has to pay government officials to get the approval,” said a Malaysia-based recruiting agent.

“So why would they want to lose such a huge opportunity to make a quick buck by including Bangladesh in the list of source countries?” he told this correspondent during the latter’s recent visit to Malaysia.

Abdul Rahman too had hinted at this underhand dealing in the 2007 discussion.

“I think you can understand what I meant by ‘special approval’. I do not want to elaborate further,” he had said.

Dhaka has many times requested Malaysia to recognise Bangladesh as a source country, but the plea remained unheeded, said an official of the Bangladesh expatriates’ welfare ministry.

“The reason is not known,” he said, wishing anonymity.

(This is Part 1 of three part series ‘Jobs in Malaysia’ originally published in the Daily Star, Bangladesh.Part 1 here and Part 2 here.)