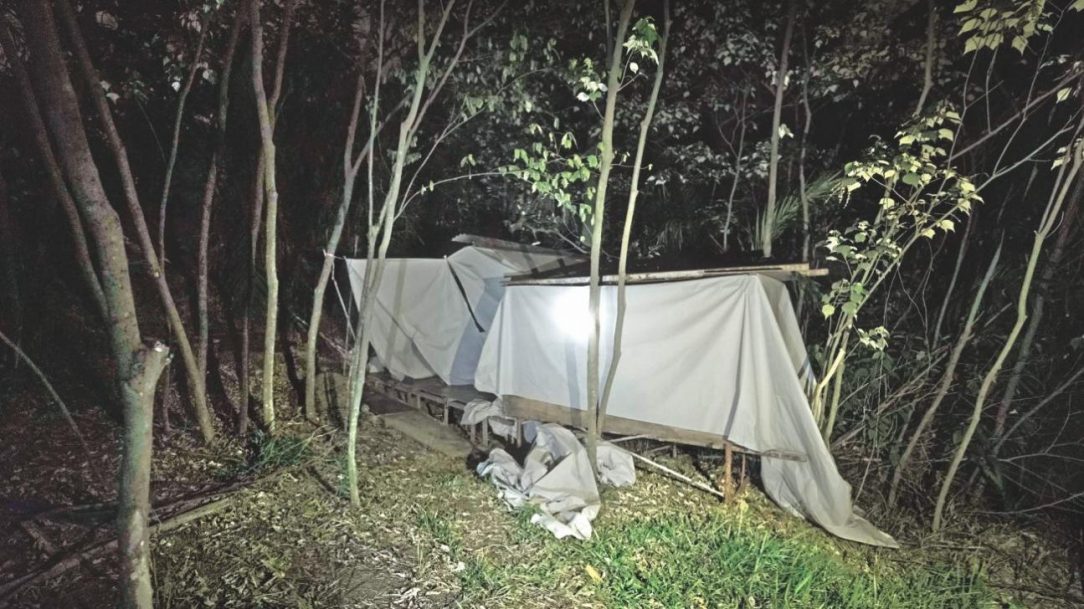 After a day’s hard work, some of the 10 workers living in a makeshift house next to a large construction site in Malaysia’s Cyberjaya were preparing food while others were either having meals or chatting before going to bed.

Suddenly, they heard the sound of four to five motorbikes approaching. They got panicked as they were not expecting visitors at that hour.

“Everyone ran frantically. I was cooking… I ran with others and got hurt as I fell down hitting an iron bar in the dark,” said 24-year-old Shanto, a Bangladeshi migrant who works at the site around 35 kilometres from Kuala Lumpur.

Their attempts to hide themselves went on for some 20 minutes until they learnt that the motorbikes were not of the immigration police, but of some Indonesian migrants.

“We are under constant fear of arrest. It’s horrible..,” said Shanto, as he described the incident, sitting in front of a shabby labour camp locally known as “kongsi” next to the site where some 250 Bangladeshis — some 200 of them undocumented — work.

Tens of thousands of foreign workers in Malaysia have been living in fear and uncertainty since the government began a massive crackdown on undocumented foreign workers on July 1 following the end of a over two-year rehiring programme.

Under the programme, undocumented workers were given the opportunity to regularise their status by applying to the Malaysian government through three local private companies.

The crackdown intensified all over Malaysia on August 31, a day after the Malaysian government’s amnesty programme for foreign workers ended.

The programme, which began in 2014, gave illegal foreign workers a chance to leave Malaysia given that they paid a fine of 400 Malaysian Ringgit (RM).

It also included a condition that those going home would be barred from entering Malaysia for five years — a provision that discouraged many from using the amnesty. They instead chose to continue to work and try to become regularised complying with the procedures.

Of the estimated one million Bangladeshis working in Malaysia, around half are reportedly undocumented.

Though most of them have applied for regularising their work permits, nearly 80 percent of them are yet to get permits, according to migrants and activists.

It’s because the three Malaysian private companies — MyEG, Iman and Bukit Megah Sdn Bhd — or their agents and subagents defrauded the workers, taking advantage of their vulnerability and lack of knowledge about the regularisation process, they said.

Each undocumented Bangladeshi worker paid the agents between RM 5,000 and 10,000 (Tk 1-2 lakh) for getting work permits. For some, the amount was higher.

A large number of irregular workers got registered with the three firms for regularisation immediately after the rehiring programme began in February 2016. But they are yet to get work permits.

Now they are in extreme fear as the new Malaysian government is carrying out drives against undocumented migrant workers with a pledge to reduce the Southeast Asian country’s dependence on foreign workers.

The crackdown prompted scores of irregular Bangladeshi and Indonesian workers, who work at the site in Cyberjaya, to live in the woods to evade arrest.

“It is better to die than to get caught by the immigration police or jailed,” said 35-year-old Shafiqur Rahman, another irregular Bangladeshi worker from Sirajganj.

He said many of the undocumented workers have been living in the woods, about one kilometre from the construction site. They built shacks with iron and wooden frames, and plastic sheets.

“We often spot snakes in the woods. The place is full of mosquitoes,” said Shafiqur, as he led this correspondent to the forest area where they now live to evade arrest.

“We cannot really sleep here… This is not a life one wants to lead. My life is ruined here,” he said.

This correspondent spoke to about two dozen irregular workers in Kuala Lumpur, Selangor, Penang and Johor Bahru. All of them said they were living in constant fear.

One of them is 27-year-old Saiful Islam from Lakshmipur, who had spent Tk 3.8 lakh to go to Malaysia in 2015 with a “professional category” visa.

According to the job contract, his monthly salary was RM 3,000. However, once he arrived in Malaysia, his employer, an electric company in Kuala Lumpur, said he would get only RM 1,000.

He had no option but to change job and eventually got undocumented.

Early last year, he got registered with MyEG through a Bangladeshi agent. Since then, he has paid the agent more than RM 12,000 but is yet to get a work permit. The agent keeps showing various excuses for non-issuance of the document.

“I was detained by the Malaysian immigration police and was kept in a camp for nine days. I had to pay around Tk 50,000 to the officials there for getting released.

“I haven’t sent any money to my ailing parents for the last one year…  I still have loans to repay,” said Saiful, who works at a restaurant in Cyberjaya.

“I am worried about the future that lies ahead of me.”

Malaysia’s Human Resources Minister M Kulasegaran avoided giving any answer when this correspondent asked him why thousands of Bangladeshi workers were not issued work permits though they paid huge sums to the three Malaysian firms for regularisation.

“I have no answer for you. It is the responsibility of someone else,” he said in response.

The minister was speaking to reporters after an event at The Everly Hotel in Putrajaya on Thursday.