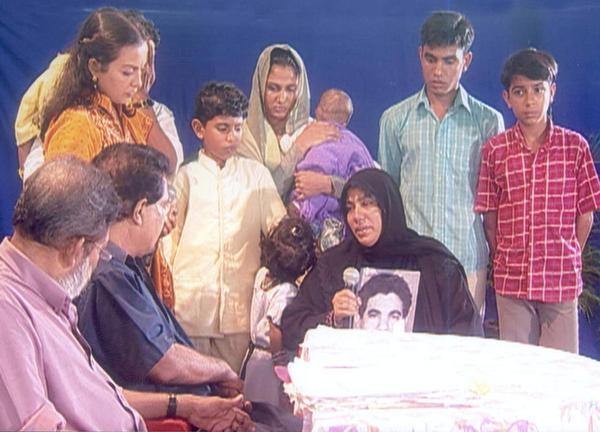 Lost and found on TV

By Rina Mukherji
No comments

A Malayalam TV show has helped track down as many as 530 missing migrant workers in the Gulf. For the families of the missing, the show is a saviour

A cousin’s sudden suicide within days of taking up an engineer’s job in Muscat saw Rafeek Ravuther wake up to the dark side of Gulf migration. Until then, like most Keralites, he had only known of the remittances that made his state prosperous, with holiday resorts springing up at every step.

Kerala has contributed the largest number of migrant workers to the oil-rich Gulf region. More than two million skilled and unskilled Keralites work in West Asia and make the majority of the expatriate population in Saudi Arabia, UAE, Oman, Kuwait, Bahrain and Qatar.

As a broadcast journalist with Kairali TV, Ravuther started investigating the underside of the Gulf dream, and came up with shocking revelations: There were people who had disappeared off the family radar, others who had landed in jail, and some who died chasing the expat life. Most of the over 30 lakh migrants from India belong to the lower strata of society, often without the means to return home.

Moved by their stories, Ravuther approached the TV channel for a programme to help Gulf migrants, in association with his Dubai-based journalist-brother Anashuddin Aziz. Noted filmmaker PT Kunju Mohammed lent his wholehearted support and agreed to host the show; Pravasalokam (the world of migrants) was launched in 2000.

The very first episode dealt with the case of two missing youth who had gone to Sharjah for work. Their photographs were flashed alongside telephonic interviews with their parents. Within no time, both men were traced to an immigration jail, where they had been sent for violating visa regulations. With the help of the local Indian embassy, Ravuther and his colleagues managed to secure their release and legalise their migrant status. The programme instantly became popular, and has gone on to trace as many as 530 of the 1,500 cases of missing persons referred to it.

The show’s format has remained unchanged and each episode deals with two cases. The phone numbers of the Indian embassy concerned, as also the channel’s local representative are flashed on screen.

Many migrant workers end up in jail after a fallout with the employer or “sponsors”. Non-payment of wages is common. Employers often taken possession of the worker’s passport. The “kafala” or sponsorship system binds the worker to the employer; he cannot leave without the written permission of his sponsor. It is not uncommon for workers to be accused of theft or other petty crime when they demand their wages or desire to leave. Consequently, they land up in jail. Unable to contact family and friends, many go missing.

Nearly 480 migrant workers have written to the show’s producers for assistance in getting them released from jail. In every case, Pravasalokam provides legal, consular and travel assistance to reunite them with their families.

Sometimes a worker may have all papers, but fail to find another job after a contract expires, forcing him/her to go into hiding rather than face the disappointment of a family back home that is dependent on the remittance.

The situation is all the more difficult for the women migrants, especially those seeking domestic work. They end up working long hours, even as they face the threat of physical assaults, sexual exploitation and rape.

Sometime ago, when an Indian-origin domestic worker tried to escape by leaping off a balcony in Saudi Arabia, her employer hacked off her hand.

When a sexually exploited migrant worker becomes pregnant, she is usually sent out by the employer. Unable to return home fearing a scandal, she invariably goes missing. Whenever Pravasalokam tracks down a woman in this situation, she is helped to deliver the baby and, if she is so inclined, give it up for adoption before returning home.

Many migrant women also end up trafficked into prostitution by unscrupulous Arab sponsors and Indian agencies; they too form a significant chunk of the ‘missing’ numbers.

Currently, Pravasalokam is grappling with 200 pending cases, in addition to appeals from another 800 Indians for help in getting pending wages or compensation for workplace accidents.

Telecast in Malayalam, the show’s popularity has now spilled over into the neighbouring southern states of Tamil Nadu, Andhra Pradesh, Telangana and Karnataka. Appeals are flowing in from these regions too, and now a tickertape in English gives the gist of each case.

Ravuthar’s growing involvement with the show soon saw him leave his job and set up the Centre for Migrant Studies (CIMS) at Aluva, Ernakulam. He now produces the show independently for Kairali TV.

Among the countless people who have voluntarily helped him trace missing migrant workers, he singles out PM Jabbir, an award-winning Indian migrants’ rights activist in Oman for over 30 years. He is a founder-member of the Non-Resident Keralites’ Welfare Board, a statutory body constituted by the Kerala government in 2009. Since 1992, he has assisted the Indian embassy in the burial/cremation of nearly 3,500 unclaimed bodies of Indians in Oman.

Although Pravasalokam started off with the Gulf migrants in mind, it now increasingly finds itself taking up cases from Malaysia too — a new destination for labour. The show is also assisting Pakistani workers, who face situations similar to those of their Indian co-workers. Clearly, Pravasalokam makes a case for a joint effort by SAARC countries to clinch a just deal for their poorest migrants, as was decided at the 2014 SAARC summit.