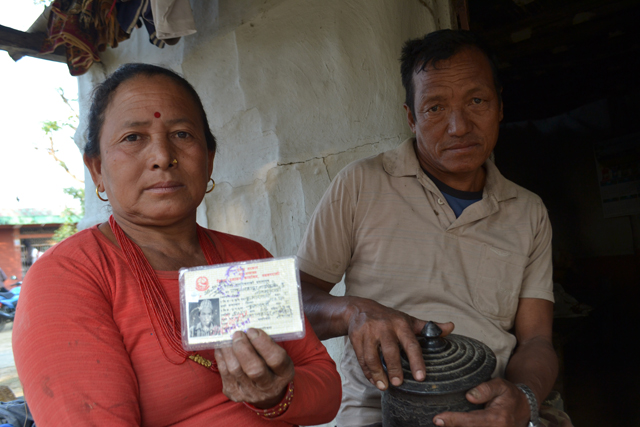 Hundreds of Nepali migrant workers never return home, not even in coffins. They simply disappear.

There are plenty of stories about the high mortality rate of Nepali workers abroad, or migrants being cheated by recruiters. Less well known is the fact that many Nepalis simply disappear while working abroad.

The Gulf countries and Malaysia have become a black hole for hundreds of migrant workers who have vanished without trace over the years. Their families are helpless, and do not know whether their loved ones are dead or alive. The government is of no help.

Since it started monitoring in 2009 the Foreign Employment Promotion Board has records of 5,000 Nepalis who have died abroad. But it does not have numbers for the missing.

In Nawalparasi alone, the Safer Migration (SaMi) project knows of 73 missing migrant workers. Dhading has 28 workers officially listed as missing. Extrapolated to Nepal’s other districts in proportion to their migrant populations, the total number of missing migrant workers would well exceed the 1,334 missing during the conflict.

SaMi forwards details of missing migrants to the Pravasi Nepali Coordination Committee, a Kathmandu-based NGO run by former migrant workers which tries to trace the missing (often unsuccessfully) through its network in the Gulf and Malaysia.

Ranjana Lamsal, a counselor on safe migration in Nawalparasi, says it is mostly men who go missing in Malaysia, but in the Gulf it is mostly women who disappear without a trace.

“In Malaysia men who go illegal cut all contact with their families,” Lamsal says, adding that the problem of female migrant workers missing in the Gulf is much more worrisome.

“They are mostly women who are trafficked to the Gulf via India to work as housemaids,” she says, “and the families do not have the documents to trace them.”

Bal Bahadur Thapa of a new network of former migrant workers in Nawalparasi, says: “The government does not care whether we die or disappear. It just cares about the remittance we send home.” 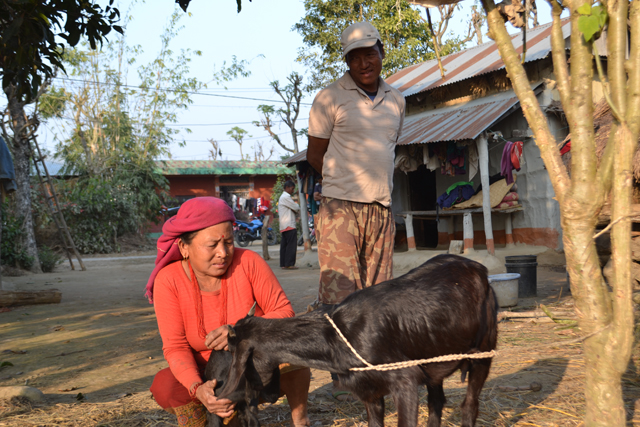 Pabi Magar (pictured above) flips through an old photo album, searching for the pictures of her son who has been out of touch for almost five years now.

“Here he is,” she says, pointing at a faded photo in which a young man is posing in front of skyscrapers in Kuala Lumpur. “He sent me this photo years ago. I don’t know what he looks like now.”

Tak’s father Lal Bahadur (at right in picture) rummages through a file and brings out the citizenship card of their son. “This is what is left of him,” he says.

Tak is their youngest son. He got married, had a child by the time he was 18, and decided to go abroad to support his family. A year later, his wife found another man and married him. Tak Bahadur stopped calling home and didn’t send any more money. Lal Bahadur and Pabi now look after their 6-year-old grandson.

“No money, no telephone, no message,” says Pabi. “I am not sure if I will ever see my son again.”

The family had borrowed Rs 120,000 to send Tak Bahadur to Malaysia. His parents now plan to sell off a portion of their land in Kumarwarti village to pay off the loan.

“I don’t want money from my son,” Lal Bahadur says, “I just want him to come home.”

Parbati Karki spent two months in a dingy hotel room on the suburb of Mumbai before finally flying to Saudi Arabia via Delhi.

The agent had taken her to Mumbai, promising to fly her to Saudi Arabia in a few days. After two months, the agent rerouted her to New Delhi, and on to Saudi Arabia.

Her family heaved a sigh of relief when she finally made it. But the worst was yet to come: she called her husband, Ram (pictured right holding his wife’s photo), from Saudi Arabia, and told him that she was abused and tortured almost every day. There was no contact until Ram received a call from Saudi Arabia from her employer. One of Ram’s nieces who had just returned from the Gulf translated from Arabic that he would send Parbati home in a few months. But there was no response on her phone after that.

“I am really worried, but I don’t know how to help her,” says Ram Karki.

Bishnu Rai (pictured below holding his wife’s photo) did not want to send his wife, Sita, to Kuwait to work as a housemaid, but he could not stop her. For a year, she would call her husband every month, asking about their four children. 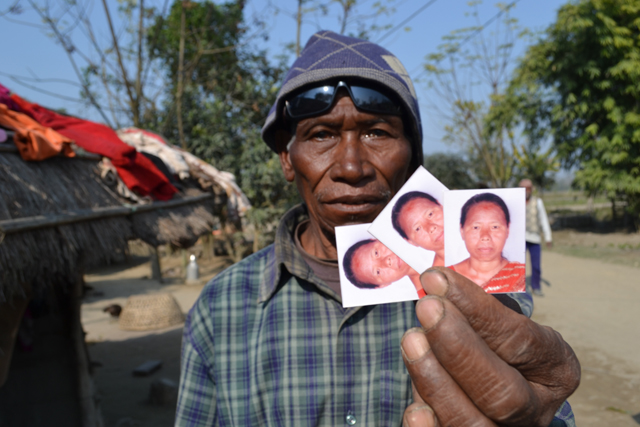 “She was a doting mother,” he says. “I never thought she would forget us just like that.”

After one year, Sita stopped calling. Bishnu had no way to contact her. He kept waiting for her calls, but there were no messages and no money. “I don’t know if she is alive,” he says, “my hope is fading.”

Bishnu worked all his life as a farmer, and never wanted to work abroad. Sita felt she needed to earn, and decided to go herself.

Through a local agent in Nawalparasi, Sita first went to Saudi Arabia as a housemaid. At that time, the government had imposed a ban on Nepali women’s entry into the Gulf. So she was flown to Saudi Arabia via Delhi.

She returned home after three years, but their financial condition did not improve. After spending a few years in the village, she flew to Kuwait once once more, but was never heard from again.