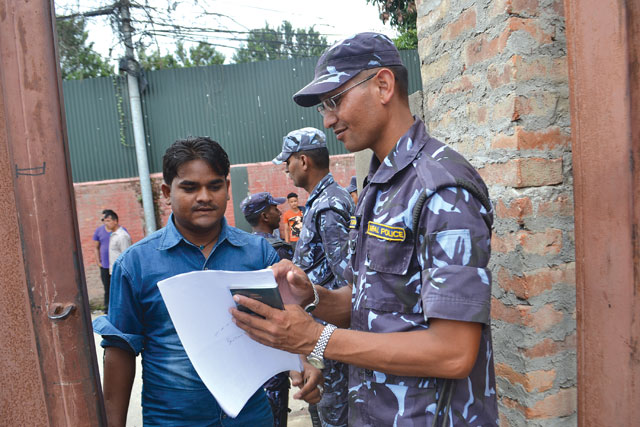 Who is against zero-cost migration and why?

After the Department of Foreign Employment (DoFE) began issuing labour permits from its Tahachal office last year, the road leading to it past Soaltee Crowne Plaza was perpetually teeming with migrant workers lining up for their travel documents.

But this week, after the government’s new zero-cost migration policy came into effect, the road is crowded not with workers but with labour recruiters to protest the rule that would exempt Nepali workers from paying for visa fees and airfares.

The ‘manpower agents’ say the new policy that would benefit hundreds of thousands of Nepali workers is “impractical” and accuse Labour Minister Tek Bahadur Gurung of favouritism towards those who own big recruiting companies.

“We will not move from here unless this zero-cost policy is retracted,” said Janak Khadka of Deluxe HR Solutions Pvt Ltd which enlists Nepali migrant workers for jobs in Qatar. Khadka is among hundreds of others that have locked out the DoFE in Tahachal and say they will not give up unless they are allowed to charge Nepali workers air fares and visa fees.

They say the zero-cost policy sounds good, but will be practical only when all employers in the Gulf and Malaysia agree to bear the cost of visas and air fares. “Only big employers are paying for air tickets and visa fees of migrant workers,” said Khadka.

To be sure, Labour Minister Gurung did own a manpower company before receiving a ticket from the Nepali Congress (NC) to contest the last Constituent Assembly (CA) elections from Manang. After winning the election he transferred ownership of all his recruiting companies to relatives.

PAPERS PLEASE: Police checking the papers of a migrant worker at the gate of the Department of Foreign Employment on Wednesday. The office has been closed after a protest by recruiting agencies. Photo: Om Astha Rai*

The NC’s decision to appoint a former manpower agent as Labour Minister was already a case of conflict of interest. And it is possible, as the protesting recruiting companies say, that Gurung was motivated to implement the zero-cost policy to benefit agencies run by his nephews and brothers.

However, instead of persuading the Gulf-Malaysia based employment companies to provide free air tickets and visas in tune with international conventions, protesting recruiting companies have been lobbying for withdrawal of the new policy. This would mean Nepali workers going overseas would have to bear the additional cost of visa fees and air tickets.

Gurung defends the zero-cost policy, saying it will end exploitation of Nepalis. “Poor migrant workers have to sell or mortgage their land, borrow from loan sharks or spend most of their savings to pay for airfares and visas, and then they end up not getting the salaries promised,” he told Nepali Times.

Some leaders of the UML, which is a coalition partner of the NC in government, have publicly criticised the policy and are putting pressure on Prime Minister Sushil Koirala to persuade Gurung to back down. Even within the NC there are some leaders opposed to Gurung who is said to be from the Sher Bahadur Deuba faction.

Meanwhile, as the sit-in by the agents goes on, it is the workers waiting for their labour permits who are suffering the most. A policy meant to protect them from being overcharged is jeopardising the jobs waiting for them overseas.

(Originally published in The Nepali Times.)