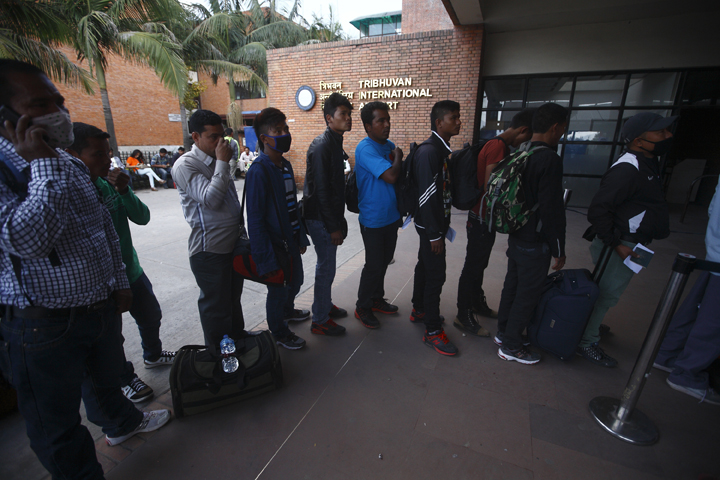 Nepal and Qatar agree an overseas contract worker shouldn’t have to pay any fees to recruiters. Where have we heard that before?

During his four-day visit to Nepal this week, Qatar’s labour minister Abdullah Bin Saleh Mubarak Al-Khulaifi said migrant workers shouldn’t have to pay anything to go to work in the gas-rich kingdom that has nearly half-a-million Nepali workers.

After a meeting with his Nepali counterpart in Kathmandu on 5 April, Al-Khulaifi told a press conference: “Qatari employers are required to pay for everything – from visa fees to air fares of migrant workers.”

The Nepali language media reported Al-Khulaifi’s remark as if it was a major breakthrough, and rejoiced that this would end extortion-like fees and exploitation of workers by recruiters in Nepal and Qatar. But as far back as 2005, Nepal and Qatar had already signed an agreement requiring Qatari employers to do exactly this: bear the entire cost of hiring workers from Nepal. 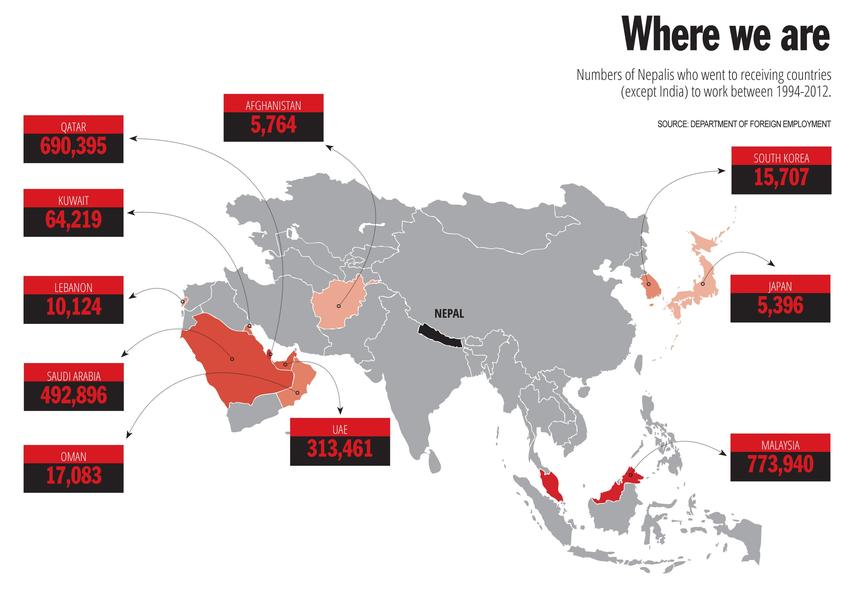 If that agreement had actually been in force, Nepali migrant workers would at most have to manage a few thousand rupees to contribute to their own welfare fund, receive documents from government offices and bear the cost of domestic travel to Kathmandu to apply for jobs and to fly out.

However, Nepali recruiters have been fleecing outgoing workers, charging them anything between Rs 70,000 to Rs 100,000 from workers as ‘facilitation fee’. Others have to pledge the first six months of what they earn just to pay the recruiters.

We asked Kumud Khanal of the Nepal Association of Foreign Employment Agencies (NAFEA) why the 2005 agreement was never implemented. He passed the buck on to Qatari companies which he said wanted a cut. “As long as the Qatari recruitment agencies demand commissions from us, the zero cost deal will not be implemented. It is the Qatar government that needs to regulate its recruitment agencies. We just pass on what they charge us to the Nepali workers,” he said.

The Qataris deny this, saying it is illegal to charge a fee that is passed on its overseas workers. Others, like Surya Nath Mishra, Nepal’s former ambassador to Qatar, says Nepali recruiters are not above blame.

“It may be true that the Qatari companies also demand a cut for finding jobs for the workers, but the Nepali recruiters charge the workers much more than what they give to the Qataris.”

Mishra says that during his tenure in Doha, he came across many Nepali workers who had paid more than Rs 100,000 to manpower agencies to go to Qatar. “I had recommended action against many manpower agencies that illegally charged money from migrant workers,” he said, “but no one at the Department of Foreign Employment (DoFE) did anything.”

State Minister for Labour, Tek Bahadur Gurung, who met Al-Khulaifi this week says this time his government is committed to implementing the zero-cost deal. “We will soon visit Qatar and find out what we can do to ensure that Nepali workers get to go there without paying a single rupee,” he told us.

Even so, the stranglehold of the manpower mafia and its nexus with Nepali politicians is so tight that many are skeptical that the zero-cost deal will ever be implemented. Said one labour rights activist. “Jobless Nepalis are so desperate to migrate and there is just so much money to be made that in the end it is the Nepalis who are the worst exploiters of fellow-Nepalis.”

Darker the color, the higher number of migrants leaving the districts. Hover over the map for the statistics. Interactive map by Ayesha Shakya

Ganesh Gurung, an expert on migration and the remittance economy, says every one, except the poor and illiterate migrant workers, knew about the zero-cost deal but no one was willing to implement it. “On the sidelines of several international conferences, I have drawn the attention of the Nepali and Qatari officials to it,” he says. “But, they have never been serious.”

The renewed interest on the part of the Qataris to implement the zero-cost deal appears to be the result of international media exposing poor working conditions for migrants in that country. It is therefore clear that the Nepal government has been forced to be serious not because it wants to stop the exploitation of its own workers, but because the Qataris want to clean up their international image.

During his Nepal visit, Minister Al-Khulaifi sent out the message that Qatar is committed to improving working conditions for migrant workers. He also promised to look into their grievances, mainly about their salaries, over-time payments, health insurance and accommodation. But, he remained silent about the controversial Kafala system which human rights organisations say bonds migrant workers to their employers.

Unlike with Qatar, Nepal has not signed any other agreement requiring foreign employers to bear the entire migration cost of Nepali workers. But, the ILO Declaration on Fundamental Principles and Rights at Works says it all.

If the ILO declaration is to be followed, Nepali migrant workers would not have to pay more than Rs 25,000 to go to work in any country, not only Qatar. They would have to pay for service charges of manpower agencies, labour permits and health check-ups. But, they are paying at least Rs 90,000 or more for overseas jobs. To go to Malaysia, where 40 per cent of total Nepali migrants work, they are forced to pay around Rs 130,000.