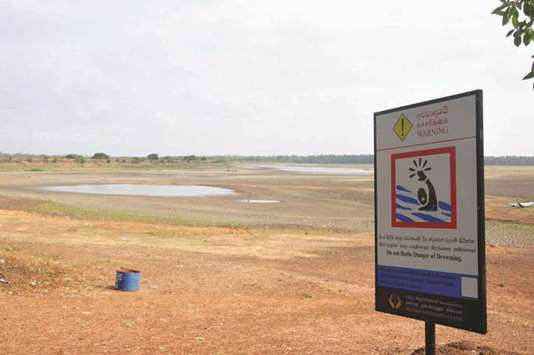 When Siri Hettige, a sociology professor at Colombo University, conducts surveys of young people across Sri Lanka, he never fails to ask one key question: Does anybody want to become a farmer?
‘No’ has been the overwhelmingly emphatic answer, he said.

That is one indicator of the growing poverty plaguing many farmers in Sri Lanka, something that is driving increasing migration each year out of rural areas.

“Farmers are moving (out of their villages) because there isn’t enough money in agriculture,” admitted M W Weerakoon, a Ministry of Agriculture additional secretary.

A rice farmer needs two successful harvests a year on 2.6 acres of land to earn the Rs17,760 ($115) a month needed to keep a family of four above the country’s poverty line, he said. A maize farmer needs even more land — about 3.7 acres, he said.

But most of the island’s rice farmers own less than an acre of land, and large numbers are facing worsening debt, particularly as droughts, floods and other extreme weather linked to climate change hit harvests.

In some cases, farmers have used their land as a guarantee for loans, and face losing it if harvests fail, Weerakoon said.

All of those pressures are driving an increase in migration, largely to urban areas, Hettige, Weerakoon and others said.

“If weather patterns bring more rain or less, a family member is placed in a city where such risks are moderated,” said Bilesha Weeraratne, a researcher with the Institute of Policy Studies, a Colombo-based policy agency.

“Vast numbers are moving due to climate risks,” she said.

But the move is not always permanent — about 35% of them remain in their new districts for less than five years, according to the Department of Census and Statistics.

Many farmers who own land move back home once enough rain — or other conditions needed to get a harvest — return, Weerakoon said.

But some migrants, particularly the young and those who do not own land, are reluctant to return.
Most migrants head for urban areas, particularly Colombo, Gampaha and Kalurara districts in the Western Province.

For the most part they come from the country’s agricultural Central, South, North Western and North Central provinces, according to Sri Lanka’s Department of Census and Statistics. In the two districts of Colombo and Gampaha, one in every four residents is now a migrant, department data shows.

Most of the migrants end up in manual labour jobs in cities, including as office help or construction workers. Increasingly many are also driving three-wheeled taxis. Migrants say finding work is increasingly tough.

“It is very difficult to get jobs because most of them are already taken. The only available jobs for someone like me is in the construction sites, which are looking for manual help,” said Sangeeth Hettiarchchi, a 22-year-old originally from Moneragala District, in Sri Lanka’s southeast.

He said he left his village last year as income from the family’s banana plot dwindled, and now works as construction worker in Colombo.

Sri Lanka this year has faced what United Nations officials described as the worst drought in 40 years.

Weerakoon said the drought has accelerated migration, with harvests expected to fall by as much as 50 % this year and rice — the country’s staple — facing the worst harvest in a decade. In Puttalam, an area in North Western Province, tobacco and shrimp farms and construction sites have seen an influx of people from drought-hit rural areas looking for day labour.

“We get a lot of people coming from the villages now because there is no work. For men we pay around Rs800 ($5) per day and women around Rs600,” said Chamindha Samarwickrema, who manages a small tobacco plot.

The drought, he said, is “good for us. We get cheap labour.”

Though its share is falling, agriculture still accounts for about 27% of Sri Lanka’s economy, and provides jobs for about 2.2mn people, according to Sri Lanka’s Central Bank.

Experts say migration itself is not necessarily negative — and could be an effective strategy in some cases to cope with changing conditions — but that many of those flocking to cities end up in low-paid jobs.

One way to make it possible for more farmers to stay in rural areas, said Weerakoon, the agriculture secretary, is to invest in facilities to process harvests and turn them into higher-value products. “Right now with agriculture it is a buyer’s market because it’s the raw product that is supplied.

Farmers need to be innovative and think about value addition, off-season and multiple crops,” he said.

Weeraratne, of the policy institute, said remittances from migrants might be one source of funding for such facilities.

“Migrants get very little advice on how to manage their remittances,” she said.

For now the government is focused on helping farmers flattened by drought get back in the field.
Weerakoon said the government was making rice seed available to farmers at half the usual price this season, hoping to see 800,000 acres of rice planted, up from 540,000 during the last drought season.

“The key factor would be that we don’t lose large tracks of the planted extent,” he said.

During the last harvesting season over 200,000 acres of the 540,000 planted were lost to drought and minor floods, according to Sri Lanka’s Department of Agriculture.

(Originally published in the Gulf Times.)