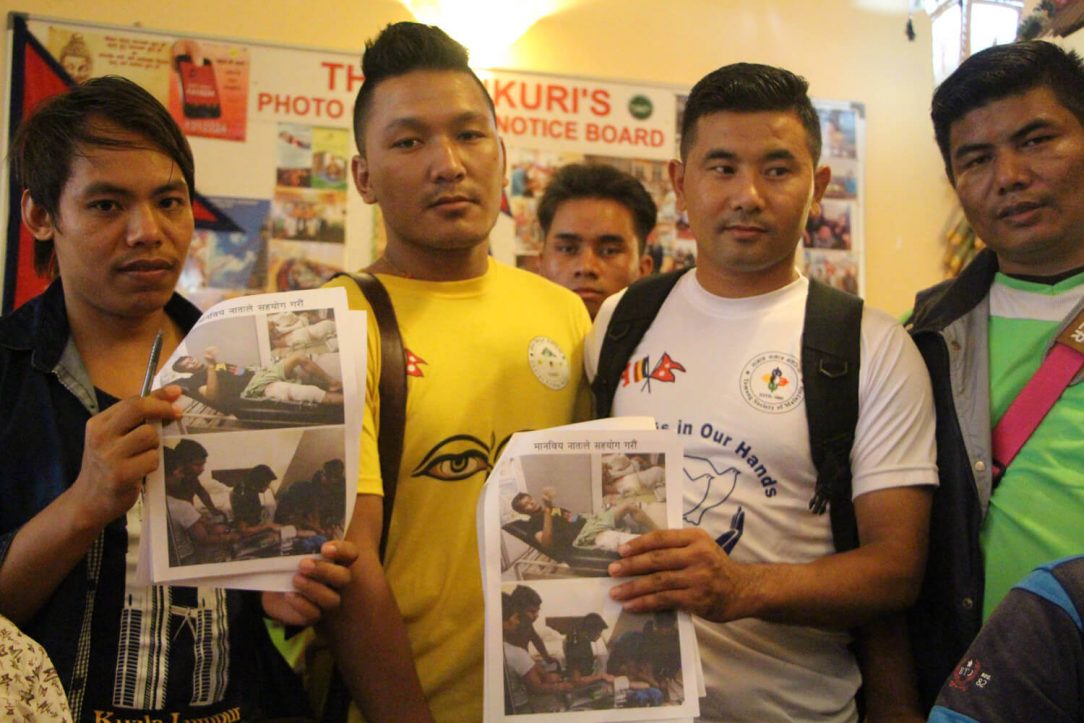 The Kotaraya quarter of the Malaysian capital comes alive on Sundays when Nepali migrant workers gather here to celebrate their hard-earned day off. The neighbourhood has over 65 Nepali restaurants, shops, remittance and travel agencies selling airline tickets catering to the Nepali diaspora population.

A lot has been said about Nepali migrant workers propping up the home economy, but Kotaraya on Sundays also shows how workers from Nepal prop up the Malaysian economy, its airlines and its commercial activity as they eat, shop, use phone cards and buy tickets home.

At one of the restaurants, a group walks around seeking donations for a Nepali worker Ram Tamang, who had been injured in an accident on his way back from work, and did not have support from his employer for medical expenses.

“We have been able to reach other Malaysian cities through social media and Nepalis are donating through their bank accounts,” says Yam Magar who says the ‘Drive To Save Ram’ has raised $2,000 so far. The local chapter of the Non-Resident Nepali Association has covered his flight home.

Stories of migrants who are injured, ill, jailed, duped or stranded are common with many seeking protection at Nepal Embassy shelters. In response, family, friends, the embassy, NGOs, NRNA or activists often step in to help with compensation and repatriation.

However, given that there are anywhere up to 600,000 Nepalis in Malaysia the sheer volume of vulnerable cases is overwhelming. The flight back can be a costly part of expenditure for wounded workers like Ram Tamang, and that is where airlines which get a bulk of their business from the travel to and from Nepal could do more.

In 2016, 3.5 million passengers used Kathmandu airport – at least 70% of them were overseas contract workers. Many of them come home multiple times during their contract, adding further business for airlines.

“The size of the aircraft used or the frequency of flights is often dictated by migrant volume,” explains a travel agent here, who wanted to be identified only as Rita.

Airlines serving the Gulf region and Malaysia operate up to 183 flights a week to and from Kathmandu. Nepali, Indian and Bangladeshi airlines offer about 104 flights via Dhaka, Mumbai or Delhi to the Gulf and Malaysia  which Nepali migrant workers also use because they are cheaper.

Migrants also form an important employee base of the airlines. Many of the baggage handlers, cleaners, food packers, apron and terminal staff at Dubai, Doha or Abu Dhabi are Nepali.

Airlines could therefore be doing more for the welfare of Nepali migrant workers, as part of their corporate social responsibility. Overseas migrant workers spend a bulk of their advance to recruiters and savings after working abroad on airline tickets.

There are many cases of migrants who have been cheated by middlemen, sent back because of improper documentation, who could benefit from return support. Airlines could set aside some tickets every week for stranded migrants, provide last minute unsold tickets to stranded migrants or issue discounted tickets for those who are in dire need of help. These could be based on referrals from embassies and rescue organisations like Pravasi Nepal Coordination Committee.

Ramesh Niroula recently returned to Jhapa after spending 11 months unemployed in Dubai fighting a case at the labour court. He was not paid for six months at a restaurant that went out of business. When he realised that the court was a dead end, he borrowed money for the return ticket and headed home. An airline sponsor would have been exactly what he needed.

Himalayan Airlines, for example, has direct flights to UAE, Qatar, Malaysia and is popular among migrants headed to Saudi Arabia with its Dammam connection. Helping stranded migrants could to its goodwill and branding. Airlines can be important allies in making migration safer, plus it would be good for business.

The planes themselves could be points for distribution of relevant information about the destination country through literature and in-flight video. There are pre-departure classes aimed at orienting migrants to life and work overseas which are monitored better now thanks to an online system that requires biometric authentication.

However, these pre-departure classes are often generic, do not address country specific issues and are provided at a time when migrants are anxious, both because they are leaving their families behind and want the paperwork to go smoothly.

On the other hand, problems with access at destination countries, scattered nature of work arrangements by individual agents, post arrival training is not seen as a feasible option except for cases like the Korea Employment Permit System which is a government-to-government initiative. Nepalis going to Korea have a weeklong pre-departure training and a three day orientation on arrival.

There are also initiatives such as Dubai’s Know Your Rights campaign with information kiosks and multilingual brochures at the airport aimed at orienting migrants right after arrival. If those working on migration issues collaborated with airlines, country specific brochures relevant for that destination including rules, contact information of support services, embassy details, and testimonials from migrants from that specific country could be provided in-flight.

Airlines can be an important and a natural partner in efforts to promote safe migration by moving from a transactional relationship towards social responsibility. It would also involve the private sector in a field so vital for Nepal’s economy.