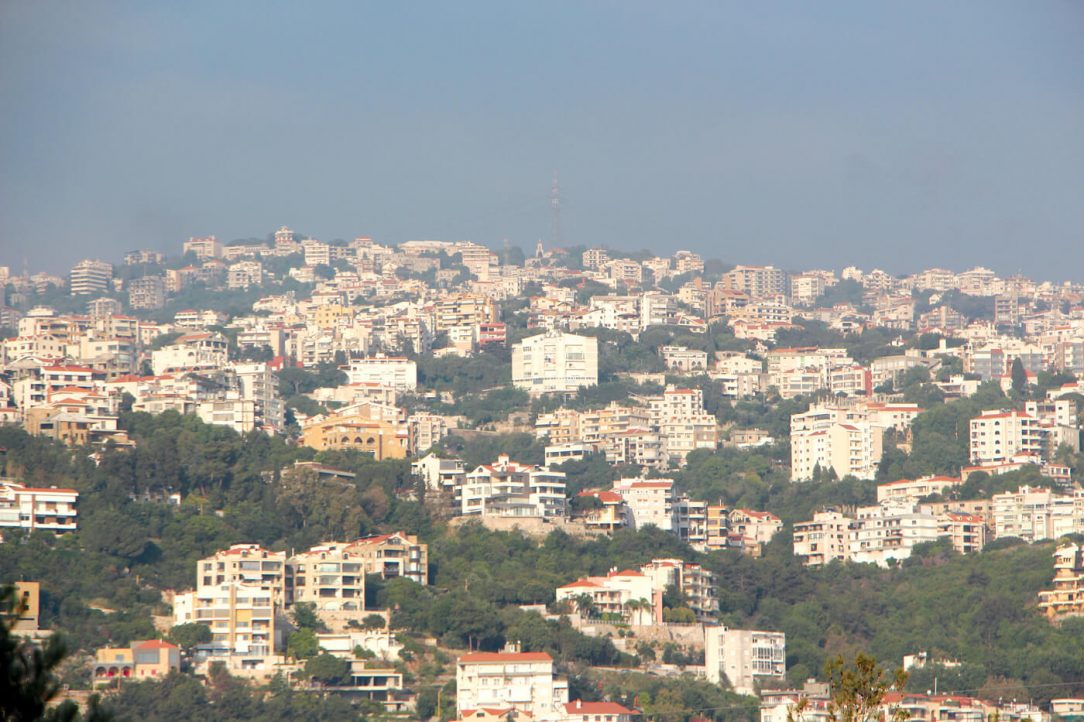 Homes away from home

Female domestic workers in Lebanon cannot visit families back in Nepal because of a travel ban that prevents them from returning to well-paying jobs.

Along with horror stories of abuse of female domestic workers, housemaids from Nepal here have a different worry – they cannot go back home for holidays because a Nepal government ban on female migrant workers would prevent them from returning to Lebanon to their jobs.

Many women who travelled to West Asia before the ban went into effect in early 2017 have not been able to travel home to visit children and families even though their employers are willing to pay for roundtrip travel to Kathmandu.

Niru has been a housemaid for the same family in Lebanon for ten years. She has developed a daily rhythm that she is comfortable with, and spends Sundays with other Nepali friends. Niru had gone back to Nepal hoping to migrate to Europe, but when that didn’t work out her Lebanese employers asked her to return.

“It was quite a scene when I landed in Beirut airport. My employer came to receive me with flowers and hugged me, and when I got to my old room it felt like home,” Niru recalls. Since then, her only worry has been not being able to go back to Nepal on paid leave every two years. Her employer compensates her financially in lieu of the air ticket, but Niru misses not being able to see her aging parents in Taplejung.

Dipa has been working for a family in Lebanon for the past decade, making about $600 a month, most of which she saves. Her siblings back home in Nepal barely make Rs15,000 a month and don’t save much of it.

“I am very happy here and so are many other Nepali domestic workers. Why is the government punishing us by not letting us go home?” asks Dipa, who could not even visit when her father passed away recently.

Unlike other migrant workers, domestic help is an intimate and complex partnership where both the employers and employees are inside the home.

There are cases of abuse and exploitation, but there are also many Nepalis who are treated well and are happy in well-paid jobs. Employers here said they prefer Nepali housemaids, citing trust, cooking skills, relationship with their children, and the bonds they have developed. 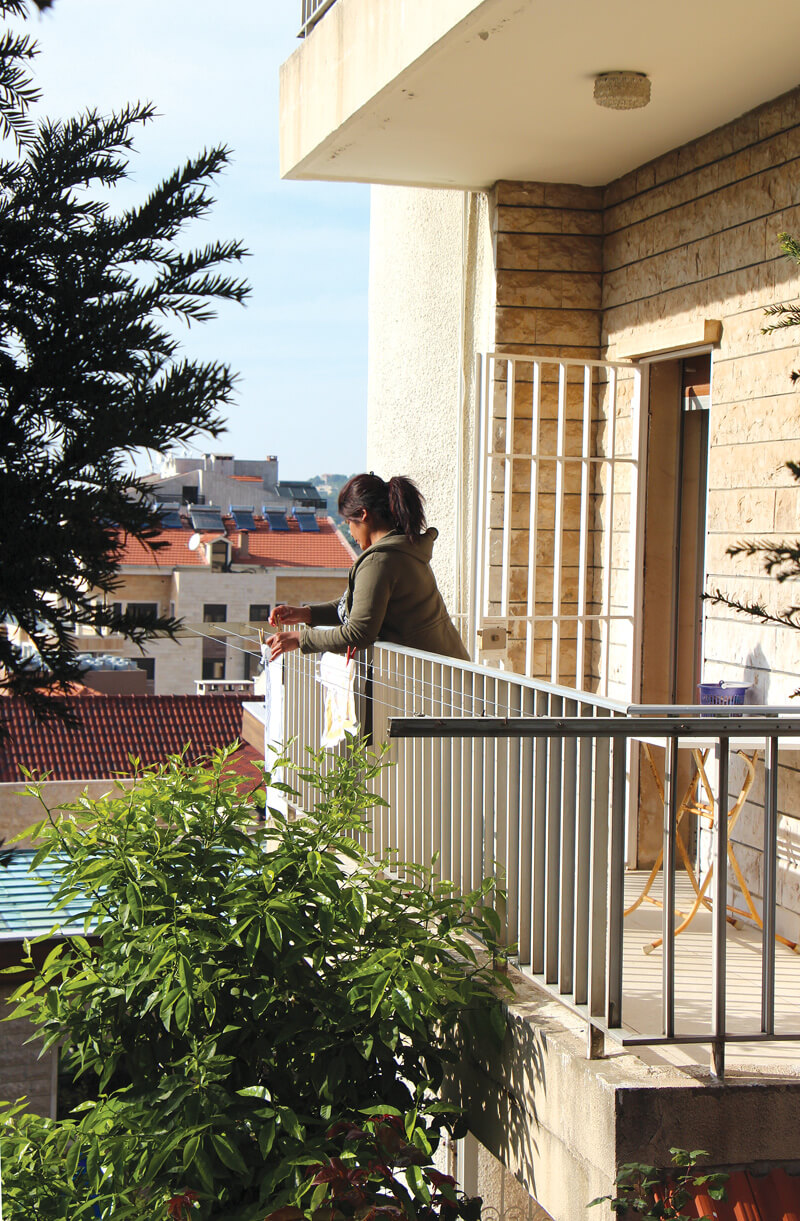 BALCONY WITH A VIEW: A Nepali housemaid in Beirut looks out to a view of the city. Workers here are mostly happy with their jobs, but say a travel ban on Nepali female workers prevents them from visiting families back home. All photos: Upasana Khadka

Niru’s employer told us: “She takes care of me like my daughter. I don’t have to tell her what to do, and have told her the house is yours. My children adore her. She is really one of us.”

Krishna’s Lebanese employer says she wants her to go back to Nepal every year to spend time with her son, Ajay. But Krishna doesn’t want to take the risk of not being allowed to return. “I feel guilty because I cannot do anything about it,” says Krishna’s employer.

Dhana has been working in the same household in Beirut for ten years. Her employer has in the past arranged paperwork through the Nepal Embassy in Cairo for her to go back to Nepal on leave. But Dhana doesn’t want to be stuck in Nepal and lose her job. Says her employer: “Dhana has a right to go home and come back.”

Nepali migrants here say home leave every two years paid by the employer are a strategic time to renegotiate salaries and benefits as employers are more open to having these discussions since there is an incentive to bring back the workers.

There are also many Nepali domestic workers in Lebanon in part-time jobs, living in apartments with fellow migrants. Not all employers, especially those without elderly or small children in the household, require full time live-in support. Many workers also prefer to live independently.

“My Madam refers me to her friends and colleagues so I have enough work every week,” says a part-time Nepali domestic. This shadow gig-economy has evolved over time in Lebanon, and sometimes involves undocumented workers some of whom get up to $7 per hour, better than what live-in workers earn. But they have to pay living costs with that, and live in fear of detention by authorities.

It is difficult to quantify what proportion of Nepali domestic workers have positive relationships with employers. Confined within households, many domestics silently endure abuse. Unlike other overseas contract work, the demand for domestic help in West Asia is expected to grow due to an ageing population, and as more families become double-income households.

Despite the ban on female Nepali domestic workers going to West Asia, many Nepali women are still travelling after paying off airport officials in Kathmandu or flying out from Delhi or Mumbai – making them more vulnerable to exploitation by traffickers and recruiters.

Women who went away before the ban are also affected because they have husbands, children and families back in Nepal whom they have not been able to see for years.

Many are unable to let go of good employers and return, or to take the risk of returning through expensive, unauthorised channels.

To be sure, not all employers are sympathetic to concerns of their housemaids, and see them as property bought from an agent. Domestic work must therefore come under labour laws of host countries, which can be implemented and monitored via government-to-government agreements so that Nepal embassies have up-to-date records of each migrant and household. However, while women from Sri Lanka, Bangladesh, Ethiopia and Philippines can ask their embassies here for help, Nepal does not even have an honorary consul general in Beirut.

Bilateral labour agreements must be responsive to market needs like the trend towards part time household help that current arrangements do not address. This has created a parallel underground market that exposes workers to disproportionate risk.

Nepal’s ban on female domestic workers was a temporary solution while abuse and exploitation were addressed. It is time to reconsider it. Or at least make special arrangements for domestic workers already abroad so they can make time off visits to meet families back in Nepal.

*Support from the Nepalese community in Lebanon, the Lebanese employers and Sameer Karki in audio collection and compilation is gratefully acknowledged. 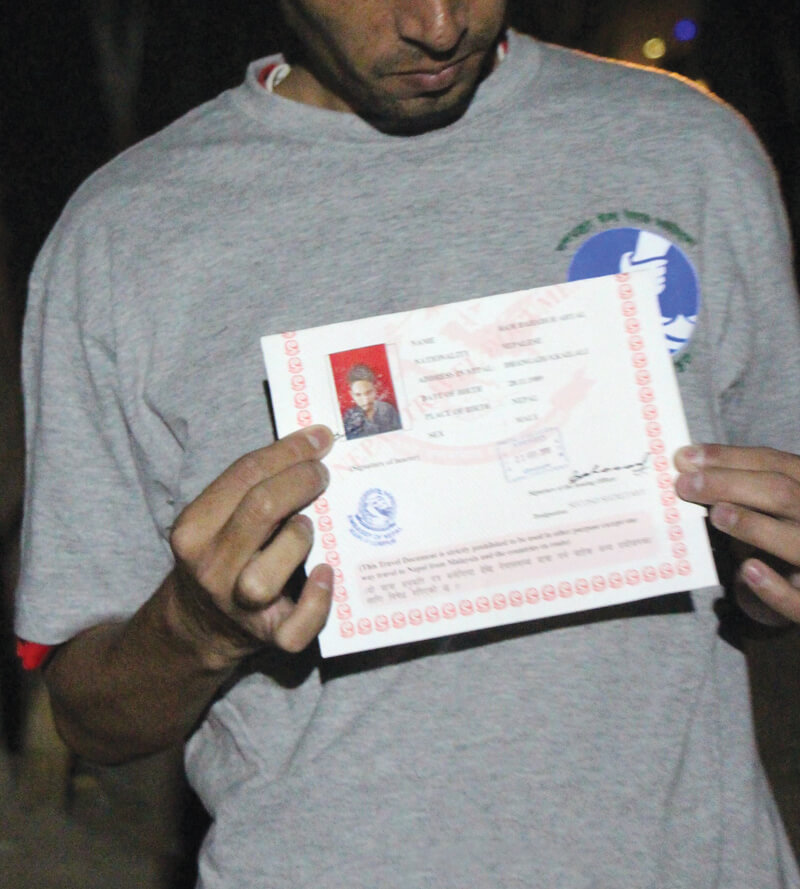 Overseas contract workers from Nepal tend to have a high threshold for risk because of the relatively better earning prospects and lack of alternatives back home.

Aspirants are often aware of the common risks to be wary of in overseas employment because of the networks of former or present migrant workers, the social web, and reports in the press.

Despite this, many continue to make risky decisions not always because of lack of information, but in spite of it. Mahesh, a seasoned diaspora leader in Qatar who has watched migrants flourish and has himself rescued many from inhumane conditions that bore resemblance to modern-day slavery, attributes this to the culturally fatalistic view that migration is a lottery.

Sharmila agreed with her agent to go to Kuwait via India despite a Nepal government ban on female workers going to the Gulf. “How else would I travel?” she asked, admitting that she knew her journey was full of pitfalls.

Her agent ensured that Sharmila was well-versed on the do’s and don’ts while crossing borders to avoid getting caught: “Only carry a handbag.” “Don’t make eye contact with anyone.” “If stopped, say you are visiting family.”

If she only made it to Kuwait, she would be able to provide for her children. Sharmila’s journey took 24 days from Nepal to New Delhi to Sri Lanka to Dubai, and she got an abusive employer in Kuwait. She had no option but to escape and return to Nepal, distraught and without savings.

When Ramesh agreed to go on a visit visa to UAE, he knew he was taking a chance by paying Rs250,000 to his agent and knew he was being overcharged, but there was that slim chance he could get a well-paying job.

However, not only did his agent fail to find him a job but was verbally and physically abusive. Ramesh’s only memory of Dubai is the nearly three months he spent crammed inside an apartment with 22 other migrants.

Shama is 24 and looks 16. She covers her face and laughs, showing the first page of her passport with a falsified legal age of 32. She couldn’t make it past immigration in Dubai and was sent back to Kathmandu which she initially avoided by travelling through India due to the ban. Shama believed her agent who lived above her room in her village because she had already successfully sent two others to Kuwait.

Nepali workers are taking risks even when they get to the destination country. Ram’s job in Malaysia had no overtime, so he switched to undocumented status to earn more money – knowing fully well he would be deported if caught. He was caught, spent six months in detention and was sent back.

He was among a group of other deported Nepalis at Kathmandu airport recently (pictured above), all were empty handed, clad in t-shirts and flipflops, walking out with other Nepalis who were pushing baggage carts with tv monitors.

What makes workers like Ram, Shama, Sharmila and Ramesh take risks is the positive outcome for others. Unlike Ram, Kul earned $300 a month as a security guard, double of what he earned in his legal job at a furniture shop. Yet, he made it back safely with a temporary pass.

The two women sent by Shama’s agents made it to Kuwait and have good employers who pay them well. Housemaids in Lebanon seem to fare well generally.

Current migration policies which fail to respond to migrants’ aspirations and ground realities, such as blanket bans on domestic workers, free visa free ticket policy, or the inability to legally switch jobs at the destination, all help make foreign employment more like a lottery than a pathway out of poverty.

In such a policy environment, general awareness and orientation programs can therefore be rendered inadequate because many Nepalis are also knowingly taking ill advised steps. And when there are first-hand failed migration attempts of members of a community, other aspirants attribute it to ill luck or fate. Unperturbed, they repeat the same steps in the hope that in their case the odds will be in their favour.

Names have been changed