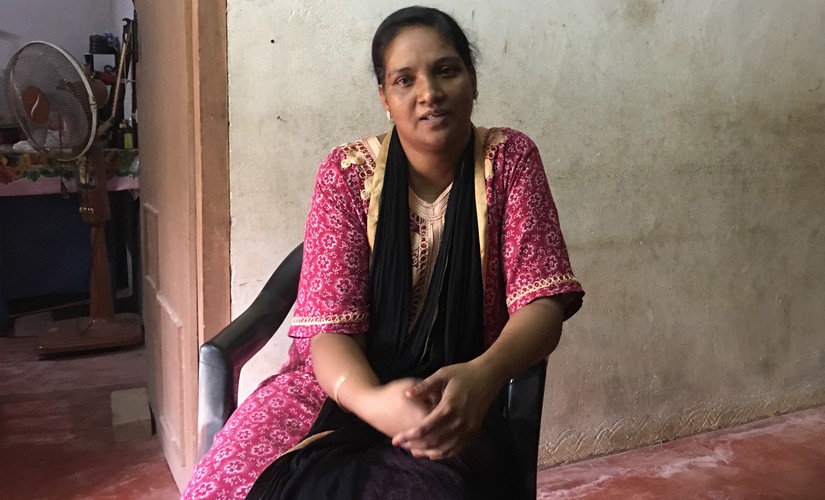 ‘Ate from garbage bins, worked more than 20 hours a day,’ says Kerala woman who escaped from Saudi Arabia after 8 months

But last week, she returned to Palode, a small village in the foothills of the Western Ghat mountain ranges in Thiruvananthapuram, empty handed with scars of physical and mental abuse after eight months of suffering.

“I ate from garbage bins in the house. I worked more than 20 hours — from 6 am till 2 am — a day in a 32-member house. I was the only domestic worker there…” Manjusha told Firstpost.

“Still, I can’t believe that I returned home somewhat safely,” adds Manjusha, who succeeded in finding help in her third escape attempt.

Manjusha was working as a salesgirl for Rs 5,000 per month in a shop in a nearby town when she decided to emigrate to Gulf due to financial issues.

“My husband deserted me long back and I stay with my parents. My father runs a small tea shop. Money is needed to buy food and pay the fees for my school-going children. So, when I saw a Gulf job opportunity advertisement in a newspaper by a travel agent, I approached them. But I didn’t realise that I will be betrayed,” says Manjusha.

The agency told Manjusha that there were no vacancies currently for her. However, she accidentally came in touch with a Keralite driver based in Saudi Arabia who told her that the Arab family where he is working is looking for a domestic worker.

“It sounded good. So, I approached the travel agent again and connected the driver with them. They agreed to get me the job. But they had tricky plans, which I was clueless about. I was trafficked and sold like a slave,” Manjusha added.

The travel agent and the driver — who was on leave in India — first took Manjusha to the Nedumabssery airport (Cochin International Airport) in Kerala. But because the immigration officials were doubtful, they denied boarding. “Twice we approached the airport officials. Both times, I was denied boarding. Then they took me to the Mangalore Airport. I was sheltered in a hotel for four days without food and then when they got an opportunity to ‘smuggle’ me, I was sent to Saudi Arabia,” Manjusha informs.

After landing at the Dammam airport (King Fahd International Airport) in Saudi Arabia on 18 March, Manjusha was welcomed by her driver friend and the Arab employer. “However, the driver friend left us alone halfway and I was taken to a different house, where there were 32 members. I was worried. But even if we are not well, we have to work like slaves,” Manjusha added.

Manjusha was paid her first salary in May, which was 400 Saudi Riyal (SAR) less than what was promised.

Manjusha was offered SAR1,400 every month. But what she got in all after eight months of work is SAR2,000.

When Manjusha developed a stomach-related illness due to lack of proper food and excessive work, she decided to run away from the employer.

“Twice I tried. One early morning, I got out of the house and walked on the street. But I was caught by the employer. The second time, I got out and sought help from people in a hospital. They called the police and the employer. But I was taken back to the home again,” she said.

However, Manjusha was lucky the third time.

“I got up early again walked out and sought help from the same hospital people. They called the police. The officer who came was sympathetic. He talked to the employer and moved me to a government-run shelter. They were also quite helpful. And after 20 days of stay, I came home last week,” Manjusha added.

When Manjusha was caught the second time, the employer had forcefully taken fingerprint consent of Manjusha in a paper which stated that she has been paid fully for the eight months.

“I was forced to do that,” she added.

Manjusha has now filed a case with the local police to claim her pending salary and has also sought the help of a parliamentarian to take up the case.

“I don’t want any compensation. I just need my salary,” Manjusha said.

“Before going, I had some debts here, which I had taken to spend for my children’s education. I have to clear that,” Manjusha added.

Even though the Indian government insists that domestic workers emigrating to 18 Emigration Check Required (ECR) countries, including six Gulf countries, should do it only through eMigrate — the official emigration channel — many fall prey to traffickers.

“I was not aware of such official channels. I trusted them,” Manjusha said.

India launched eMigrate in 2015. The eMigrate system ensures the protection of the rights of Indian workers migrating abroad.

In 2016, the number of Indian migrant workers who were given emigration clearance for recruitment in Gulf countries was 520,960.

According to Sister Josephine Valarmathi from National Domestic Workers’ Movement in Chennai, this is only a fraction of the total number of domestic workers in the region, most of whom are not working officially. “Often, we come across trafficked cases,” she said.

According to an Indian Parliament document, the government received 220 cases against fake recruitment agents from 1 January 2017 until 30 June 2017.

Meanwhile, Rafeeek Ravuther, director of Centre for Indian Migration Studies, said that there are at least a dozen cases of Indian domestic workers stranded in Saudi Arabia and other Gulf countries.

“In many cases, when we approach the central government, we get tepid bureaucratic responses only,” Rafeek said.

(Originally published in the Firstpost, India.)