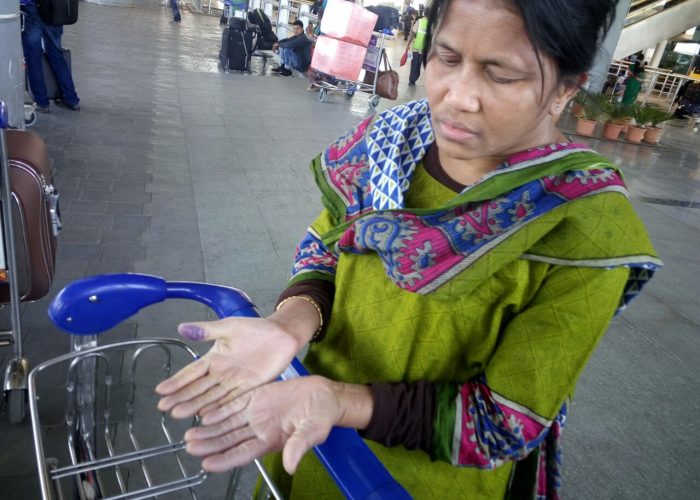 Suffering beatings, burns and abuse for over a year, a domestic maid escapes from her Kuwaiti employers and finally comes home

“I was beaten up daily for silly reasons. I was locked up in a store-room and they used to inflict burns on my body whenever they were angry. They provided only a little food just to keep me alive to work. Many a time, I slept with hunger pangs. There was no hope at all. I thought that I will die there. I was slave. Really, a slave.”

These were the words of Balla Padma Pande, an Indian domestic worker from East Godavari district in Andhra Pradesh, who returned empty-handed from Kuwait with burns and bruises after being kept under house arrest for nearly seven years.

Pande had gone to Bahrain and Dubai earlier with high hopes and later to Kuwait in 2009. But luck was not on her side.

“Everything was okay for two years, till my employer was alive. After his death, the wife got married to another person. The new person was quite arrogant. He, my late employer’s wife and her son started to abuse me physically and mentally,” Padma told The Lede while she was travelling to her home from Hyderabad airport on Friday on a bus.

According to Pande, she was not given a phone to contact her family or her husband who was working in Dubai as a painter. She was not allowed to step out of the house or talk to any neighbours. “It was jail. Really a jail…,” she reminisced.

When queried as to why nobody from her family had approached Indian authorities, she said that all of them were illiterate and might have thought that she had gone ‘missing’ or dead. “Only my aged in-laws are there at home. They might have been clueless on what to do,” she added.

Additionally, as her husband was on a work visa for his job as a painter, he was unable to travel from Dubai to Kuwait to look for her.

After seven years of ‘house arrest’, on November 11, 2017, Pande found the hidden location of the door key and early in the morning of November 12 , hold of the key discreetly, opened the door and ran away.

Unfortunately, as she was not well she could not walk for very long and fell unconscious on the road. “I fell down unconscious on the road. Somebody informed the police, they took me to a hospital and I was admitted there for a week. They took a statement from me and moved me to the Indian embassy shelter. With the embassy officials and social workers’ help, I am now on my way home,” she added.

Confirming her travails, a senior official at the Indian embassy in Kuwait said that she had undergone severe mental and physical torture. The official wished to remain anonymous.

“She was found unconscious on the road and was taken by police to hospital. From there they took her statement and was shifted to Embassy shelter on November 21,” the official added.

According to the official, she had come to Kuwait in 2009 on a domestic worker visa, which is called “No 20 visa” by the Kuwait government.

Once at the embassy shelter, both embassy officials and the Kuwait Police took up Pande’s case seriously. “We took up the case with Kuwait Manpower Ministry too with the involvement of Kuwait Human Rights Society,” the official added.

Pande has given a power of attorney to claim her salary dues of 10,000 Kuwaiti Dinars (around Rs 21 lakhs) to a lawyer with Kuwait Human Rights Society and additionally filed a criminal case for physical and mental abuse.

She was earning around Rs 10,000 per month, which she got only for the first two years (2009-2011). She claimed that she was not paid even a single penny after that until the time she ran away. The embassy official, said that, her sponsors, the two Kuwaitis, have been jailed.

An Indian lawyer in Kuwait, who requested anonymity, said that usually, such cases take three to five years to reach a conclusion. “Moreover, it all depends on how strongly the petitioner’s lawyer is able to prove the abuse evidence in the court, which sometimes is quite hard. However, cases don’t take much time like in India. Maximum, it is five years,” he added.

According to Sister Lissy Joseph, from National Workers’ Welfare Trust in Hyderabad, who filed the grievance for Pande’s repatriation said that the migrant had to undergo unbearable torture. “When we were informed by social workers in Kuwait about Padma, we started filing petitions officially to repatriate her. It started in November 2017 and now she is back home,” Sister Joseph said, adding that Pande’s case is not an isolated one.

“There are a lot of Padmas from all over India,” she said, adding that she comes across at least two cases every month. “Government is seriously acting to ensure safe, orderly and regular migration. But somewhere it fails. Until we fix it, such cases will repeat,” she added.

Talking to The Lede from the Hyderabad airport, Pande said that her only request to the government is to ensure safe migration and protection of migrants like her.

According to a document submitted in Parliament in August 2017, there were 1206 complaints registered by exploited Indian women in Kuwait.

Even though the Indian government has put in place several steps to safeguard the interests of Indian female workers migrating to Emigration Clearance Required (ECR) 18 countries, including Kuwait, in view of complaints of exploitation and harassment of domestic sector workers by unscrupulous agents and employers in the Gulf countries, recently several steps were eased.

The bank guarantee norm implemented in 2014 as a welfare move, had to be provided by the foreign employer who wanted to recruit Indian women as domestic help.

It had acted as a shield for women domestic workers if the employer failed to pay wages, or the domestic worker was subjected to abuse and required compensation and financial aid to return home.

When the bank guarantee norm was implemented by the Indian government, Kuwait employers were reluctant to follow the norms and the Kuwait government banned recruitment of Indian women domestic workers. As a result, India went back on the rule.

According to the senior official in the Indian embassy in Kuwait, when the financial guarantee scheme was lifted, the Kuwait government reportedly misunderstood the decision and the Kuwait media reported that the ban on Indian women domestic workers has been lifted.

“Still confusion prevails. However, we are aware that hundreds of visas are being issued by local government and women are being brought into Kuwait unofficially,” the official added.

Even though Kuwait is the first country in the Gulf region to have a labour law for domestic workers, activists claim that the law fails many a time to protect the workers’ rights. “Kuwait has also set USD 200 as minimum salary for migrant domestic workers but many don’t get the minimum wages in practice,” Rafeek Ravuther, director of Kochi-based Centre for Indian Migrant Studies (CIMS) said.

Human Rights Watch has documented widespread abuses, including non-payment or delay of wages, long working hours with no rest days, physical and sexual assault, and lack of a clear channel for complaint redressal.

In April 2017, a video of an Ethiopian domestic worker falling from what media reports say is the seventh floor of an apartment building in Kuwait went viral online. The woman lost her grip and fell down. According to media reports, the housemaid was hospitalised and the employer was arrested.

However, in its 2016 Trafficking in Persons report, the US State Department upgraded Kuwait from tier 3, the worst level, to tier 2 while keeping it on watch list, citing an improvement in its treatment of migrant workers, including maids.

(Originally published in the Lede.)