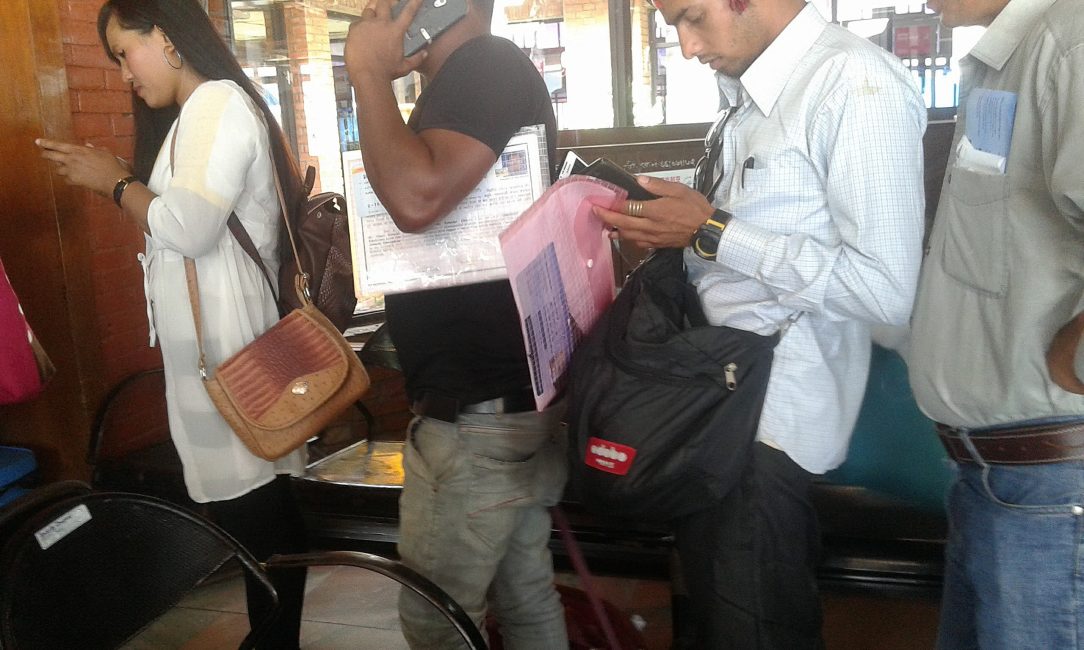 I’ll call him Kasendra. He is sitting next to me in a packed, sweaty room at the Kathmandu Airport, in one of those uncomfortable iron seats mounted on metal bars. He is clutching a transparent light blue plastic folio and reading the contents within, without taking the documents out.

The documents are from a manpower agency in Kathmandu and there is a big white patch with the number 12 written on it on his green passport. I look around and see that there are many who are holding such documents and passport with the white patch. Most of them, at least the young ones are dressed in the latest fads that most background dancers in Bollywood movies promote – tight, bright coloured t-shirts, sneakers and sunglasses mounted on their foreheads.

“Where are you going to?” I ask, Kasendra. It startles him, but he says he is one his way to the United Arab Emirates as a migrant worker. His English is limited to hellos and how are yous and my Nepali even less.

But he tells me that he is planning to stay in the UAE for at least two years, at a salary of around $200, the latter he was not sure. What he was sure of was that he was in serious debt – the whole job acquisition has set him and his family back by around $3000 – a big deal. So even if he works the two year target he has set himself, he will be barely out of the woods.

There are over 1.8m Nepali immigrant workers, most of them work in the construction industry and in the Gulf. Like Kasendra , close to half a million Nepalis travel overseas annually for the first time as migrant workers. They sent around $4 b back to their country, a huge amount, in a country where the GDP is about $21.1b according to the World Bank.

More importantly the remittances sent by these workers remain within the country and are more often than not converted to local currency pretty quickly. They mean a big deal to this economy, or at least they should.

As is the case with Sri Lanka . There are close 2m Sri Lankans working as migrant workers, most of them in the Gulf. They sent remittances  back home which accounted for at least 9% of out GDP accoutering to Bureau of Foreign Employment and little over half of that came from the Middle East.

According to the Bureau, over 250,000 Sri Lankans leave every year as migrant workers, or over 700 departures per day- the bulk to the Gulf.

Any upheaval political or security in the Gulf could hurt countries like Sri Lanka and Nepal as much as any others in the region. The current crisis with Qatar being ostracized by its neighbours led by Saudi Arabia has not simmered long enough to have an impact – but it does have the potential do so.

There was at least few stories when Saudi Arabia announced that it was cutting all diplomatic ties with Doha and closing airspace and the only land border – Qataris who were running businesses in the Kingdom ran off leaving their migrant workforce to fend for themselves.

Some reports indicate that at least 300,000 workers have left  Qatar with a slowdown expected in the construction industry. Most of these were daily wage earners who would work on construction sites on casual hires.

Workers who earn around $200 in Qatar and pay hefty debts back home also will feel the pinch of price increases if the diplomatic spat lasts.

Sri Lanka may not feel the direct impact as much as Nepal which has over 400,000 citizens in the Gulf  state. Before the spat each day 800 Nepalis  applied for work permits for Qatar, that number has dropped by 25% by July. Alarmed, the Nepali government sent a fact finding mission to Qatar,  which came back with the all clear.

Here is a fun fact – soon after the crisis unfolded the Qatari Treasury said that it had $340 billion in reserves. Now put this in to perspective – both Sri Lanka and Nepal put together on a good day will reach around $14b. Or if it were the 2004 tsunami, Qatar could absorb the damage and rebuild hundred times over and still have a cool $ 40b to spare. Qatar may ride this storm, some our neighbours may not be so lucky.

Back to my flying companion, Kasendra, now we are cruising and the in-flight service includes beer, as the hostess passes and I indicate no, Kasendra gives me one of those pleading looks. I change my mind and get my beer and give it to him. He shares it with another Nepali woman seated on my left side. There is beer exchange across my face at 30,000 feet.

We go for seconds and the same ritual repeats. “no beer there,” Kasendra tells me and grins for the first and the last time during our shared journey.

It is going to be one bumpy ride, more so for the two traveling companions than to me.