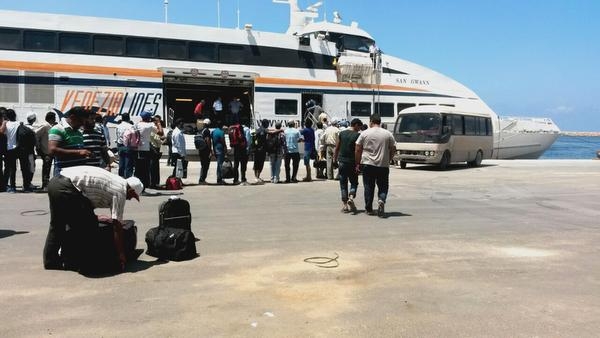 By R.K. Radhakrishnan
No comments

It is estimated that over the next few years a large number of Indian labourers will head back home because of economic downturn and political upheavals in West Asian countries. Rehabilitating them will be a big challenge for the Central and State governments.

The end is nowhere in sight to the fighting in Yemen, one of the poorest among the Gulf states, but that has not stopped Indian migrant labour from getting into the country. The Sana’a airport was no longer operational, and Indian labourers were finding their way through the land route from Oman, said an official of the Ministry of External Affairs (MEA) who has served in Yemen.

“The situation there is dire. But that is not stopping many from India, including nursing staff, from entering Yemen,” he said, adding that this was because they hoped that the fighting would come to a close in the near future. It appears that some of these Indian workers were rescued from Yemen during Operation Raahat in 2015, but lack of opportunities in India have forced them to return.

According to official statistics, the Government of India facilitated the repatriation of 4,748 Indian nationals from Yemen during 2014-16. In 2014, only four ECR (Emigration Check Required) passport holders were granted emigration clearance to travel to Yemen. This was just one in 2015.

India has restricted its nationals from travelling to Yemen since last October, and any violation of the order is punishable with measures that include revocation of the traveller’s passport. But this has not had much effect on those wanting to get back to the jobs they once held.

The confidence of those heading to Sana’a and other places is boosted by the MEA’s data, which show that only 25 Indian workers had died in Yemen from 2013 to 2016, compared with much higher numbers across Gulf states. And, only one Indian migrant labourer is in jail in Yemen compared with hundreds in neighbouring countries, according to a reply by Union Minister of State for External Affairs M.J. Akbar in the Rajya Sabha on August 10, 2017.

One of the largest mass evacuation operations to date involving the Indian Foreign Office was in July 2014 in Libya. This was done after Indians in Libya began sending panic messages requesting evacuation when the fighting between militias there intensified. The MEA dispatched a team of four officials, headed by P. Kumaran, a Joint Secretary, who had served in Tripoli in the late 1990s, with just a day’s notice.

As many as 6,000 Indians lived and worked in Libya—a country of over two million square kilometres. Surmounting many odds, the team evacuated over 3,000 Indians in a matter of few weeks. Between 2014 and 2016, as many as 3,775 Indians were evacuated.

But more than 2,500 Indians were still left in Libya, and MEA officials recounted that those who refused to be evacuated hoped that normalcy would return soon. “In areas where there is no ongoing violence, people don’t feel unsafe and are not motivated to leave. Their immediate concerns appear to be outstanding salaries and allowances rather than evacuation. A number of health workers who are from Kerala argued that they would have no jobs or income once they returned to Kerala and that the State government would not do much to help,” said an official who was part of the operation.

What happened to those who were evacuated and brought back to India? “Our work ends when we touch down in India,” an MEA official who has served several tenures in the Gulf countries said. “But there are no support structures in India that can help these returnees in a sustained manner,” he added. In his view, most of those who were evacuated have gone back—and many to Libya.

More migrant labourers from the Gulf countries are coming back to India than ever before consequent to loss of jobs, and government welfare measures exist barely, even on paper, for such returnees.

Resettlement of returnees is a State subject, and the MEA can, at best, offer its advice on the issue. Some State governments such as Kerala, Telangana and Andhra Pradesh have taken measures to address at least some of the issues facing the returnees, but most of the other States have no programme to ensure a smooth transition for these foreign-exchange earners.

Non-resident Indians remitted to India $65 billion in 2017, says a World Bank estimate, topping China, whose residents sent back $61 billion the same year. The only data that reveal the number of Indians returning are available from the remittances. According to the Reserve Bank of India, in 2014-15, the remittances stood at Rs.4.38 lakh crore. In 2016-17, this dropped to Rs.3.66 lakh crore.

But there are risks in extrapolating this data with those of returnees, because the remittances are not only from workers; this is the sum total of all regular remittances. The one number that is available is from the Indian missions in the Gulf countries. The Indian mission in Saudi Arabia extended consular assistance and provided food and accommodation to those in need and issued emergency certificates to 32,845 workers under the amnesty drive in 2017 (numbers until November 2017) to facilitate their return to India. The Saudi Arabian government announced an amnesty beginning March 29, 2017, aimed at repatriating irregular expatriates.

The Nitaqat (Saudisation) policy of Saudi Arabia in 2013 saw the return of 1.42 lakh Indian nationals to their country. The Saudi Arabian government itself has come up with a blueprint of Saudisation, called Vision 2030, which aims at filling the maximum number of vacancies both in public and private sectors with Saudi nationals. There are about 30 lakh Indians in Saudi Arabia. Since July last year, the Saudi government has imposed a massive hike in the expatriate dependent fee, from 100 riyals (per family) to 1,200 riyals (per individual of the family) annually. This is forcing many Indians to send their families back home or reconsider their decision to work in Saudi Arabia.

Resettlement measures are ad hoc: when workers, cheated by a company in Oman landed in Hyderabad and Visakhapatnam in October last year, they had too little cash with them for the bus fare home. Sensitised by non-governmental organisations (NGOs), the Telangana government gave Rs.500 to each of the returnees to head home.

Though this was hailed by some NGOs as a big achievement, the State government did not consider it a priority and the returnees themselves were not aware as to what to do or whom they should approach. NGO representatives in Telangana said that most of the workers tried to go abroad again. Some have been successful, while others try to adapt to their new realities. But the lure of the substantially higher wages for the same jobs they held here is too tempting to fade.

“There are some reports of retrenchment of Indian workers and loss of jobs resulting from closure of companies as well as premature termination of existing contracts,” an MEA note made available to the Parliamentary Standing Committee says. “Instances of unpaid dues/salaries have been reported from Kuwait, Qatar, Saudi Arabia and Oman in recent months. Kuwaiti authorities have imposed a hike in [rates in] availing medical treatment, charges for obtaining residency, etc., in respect of expatriate workers. The recent GCC [Gulf Cooperation Council] crisis involving Qatar has created financial pressure on companies undertaking infrastructure projects and may have potential adverse consequences for Indian workers,” according to the note. On a question relating to problems faced by migrant workers upon their return to India, raised by a member of the Standing Committee on External Affairs, the MEA said that the government had launched a State Outreach Programme (Videsh Sampark series) from May 2017 to generate awareness in the States, and during such conferences with the States the resettlement and rehabilitation would be taken up at the higher level. But there are many challenges, as a result of which the returnees are short-changed.

In the view of the MEA, the problems include the inability of States to absorb the returnees and offer employment because of the already high unemployment rate, and the States’ economic and employment situation not being strong enough to introduce social programmes and sociocultural reintegration of the returnees. The other important issue is the non-existence of establishments at the State government level to guide the returnees in an integrated and comprehensive manner, apart from the fact that the returnees are not preferred for any soft loans or other financial benefits.

It appears that even the system is geared to fleecing the returning migrant labourer. Often, during the seasons that workers travel home, air fares are abnormally high. When this was brought to the notice of the MEA, it flagged the issue with the Ministry of Civil Aviation. But there has been no solution in sight.

“Our mission in the UAE brought to our notice that the inadequate number of flights, especially during the Onam festival period, led to higher fare,” the MEA said. “The Indian community in Sharjah and other emirates has also complained about this. Additional flights during this period would certainly contribute to more affordable fares for the Indian working class in the UAE.”

But there is a catch. Price is a factor of demand and supply. Indian carriers have not been able to utilise the full capacity allocated under Air Services Agreements for various reasons while Gulf carriers have been seeking permission for extra capacity on Indian routes. The Ministry of Civil Aviation is yet to take a favourable decision on this issue.

Over the next few years, it appears very certain that more Indian labourers who had migrated to the Gulf states—about 8.5 million legally—will head back home. As West Asian countries grapple with their new problems, economic downturn and political upheavals, instances of Indian workers being asked to leave before completion of their contracts will only rise. Cases of unpaid dues and wages have been reported from many countries, including Qatar, Saudi Arabia, Oman and Kuwait.

Most State governments are unaware of the issues of the returning workforce unless labourers are in conflict with the law and are jailed in a foreign country. As of now, the returning Indian migrant labourer has to largely fend for himself/herself: rebuild one’s life in a setting that was left behind very many years ago and find a job to sustain oneself.

(Originally published in the Frontline, India.)