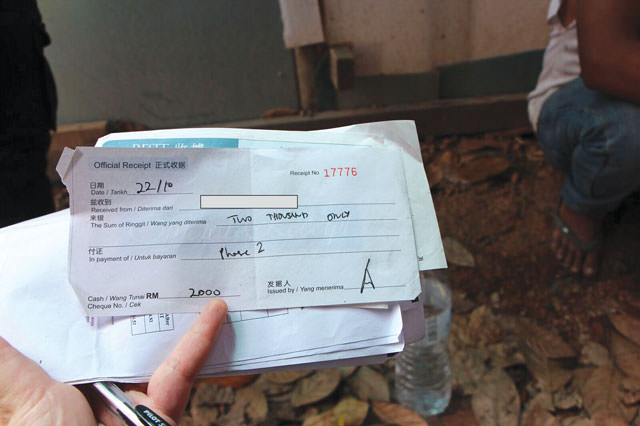 Caught in the middle by middlemen

Ram was sent to Malaysia by an agent from his village in Dhanusa, and is currently in Kathmandu en route to Dubai. When asked if he used the same agent for Dubai as he did for Malaysia, he replied: “Despite arranging a good job for me in Malaysia, I did not trust him because his involvement in unsatisfactory migration cases while I was away had marred his reputation. So I changed my agent.”

Ramesh, a Qatar returnee also from Dhanusa, says migrant workers like him often exchange information they have on recruiters. “We can contact current migrants easily at destination countries through Facebook Messenger and IMO to get up-to-date information. We ask about the kind of job and the salary that the agent has arranged for them before making a decision,” he explains.

Tarai-based migrants prefer agents from their own community to protect them from cheating. Still, Jugnath from Siraha knows of a recruiter named Ramesh who ran away with workers’ advances. He is now in Delhi and runs a momo shop. “He has not dared to come back even when his wife died two years ago,” Jugnath says.

While cheating by agents remains common, migrants are being more careful in their selection. Hira from Dhanusa says he investigates the assets of agents to gauge whether they are trustworthy. He says: “Agents with land and houses are tied down and cannot run away and it could signal their ability to return our recruitment costs if our migration attempt fails.”

Given the information asymmetry between an employer in Malaysia or the Gulf and an aspiring migrant, there are many stories of contract substitution upon arrival at the destination with less favourable terms of employment and rent-seeking by agents.

However, migrants and even repeat migrants, knowingly continue to rely on middlemen despite the risks and the higher costs. Information regarding job demand is only one of the services provided by middlemen, and there is a love-hate relationship between migrants and their agents.

In the Tarai district of Siraha, greater accessibility, familiarity and proximity to agents than with the Kathmandu-based manpower companies makes local recruiters a more convenient option despite their gouging.

While agents continue to play a prominent role in migration, conversation with migrants reveal that unlike in the past, when agents were relied upon blindly, migrants have become more careful selecting agents these days. Trust and reputation, asset ownership and demonstration effect emerged as key considerations.

Trust is key, which is either built through personal relationships with the agent or through referrals of trusted community members. However, trust in an agent is not permanent and migrants update their beliefs about them constantly based on recent migration cases.

In addition, migrants also look for other clues to gauge an agents’ credibility based on how well their clients have done while abroad. The demonstration effect of factors like property and the kind of schools a current migrant’s children go to can be important clues.

Migrants crammed into an apartment in Dubai where space was so tight that anyone who got up to go to the bathroom or for a walk would lose his spot.

But labour recruiter Hari says such evidence can be misleading. “Migrant workers just see the money and not the hard work and overtime under challenging circumstances put in to earn that much,” he says. “This can wrongly shape their expectations about the foreign dream because most migrants tend to downplay the difficulties faced abroad.”

Manpower companies in the capital subcontract their work to local agents because it is not physically possible to follow up the process with each worker.  But they are also outsourcing the need to deal with complaints.

A tainted reputation can be irreparable in the community and local agents often find themselves stuck between migrants and manpower companies. But there are also Nepali agents working in host countries supplying workers to big recruiting agencies.

“I got paid a commission for each worker I brought to my security guard supply company, and given that many migrants are not happy with their jobs, it is not difficult to attract workers,” says a Kuala Lumpur-based Nepali agent named Hari.

The role of agents also increased significantly in Malaysia when it started sending back undocumented migrants on special travel passes. While the process officially costs $360, migrants end up paying twice as much since agents know how to grease the wheel.

“Of course we would prefer to get the paperwork done ourselves, but given that they made the process easier for us at a markup, we rely on them,” shrugs Tirtha, a recent returnee from Malaysia, who worked as an undocumented security guard.

Migrants choose foreign-based agents on the basis of trust and referral by social networks, but still get duped. They don’t have the same level of accountability that they expect from Nepal-based agents from their own communities. Unanswered phone calls and visiting cards with fake office names are the norm.

Jana, an undocumented worker in Malaysia, was duped by an agent who charged him to legalise his status. “Even though I have the receipt, there is nothing I can do with it because of my undocumented status,” he says.

Fourteen Nepalis were recently deported from Dubai after being sent by agents on visit visas instead of worker visas, on the pretext that it was a quicker way to go abroad. The agents paid Rs28,000 per migrant to Kathmandu airport staff to let their clients pass through.

They were promised that a Dubai-based agent named Prem would get them jobs as lifeguards. One of them, Padma, recalls his sinking feeling when he saw a large number of flipflops outside Prem’s Dubai apartment, where there were 22 other workers crammed into a small room for months. Instead of finding them jobs, the agent started abusing them verbally and physically, and they returned when their visitor visas expired. The 14 were cheated by agents in both Kathmandu and Dubai, and now await justice.