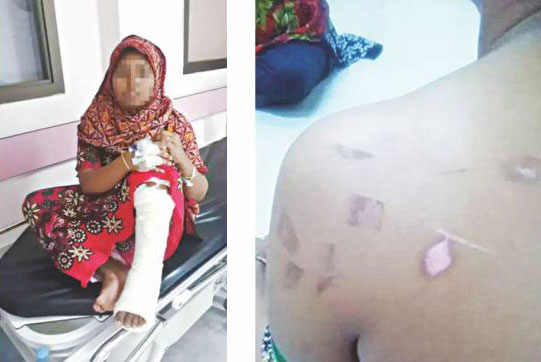 Left with dreams, returned with nightmares

Sharmeen (not real name), 35,  of Munshiganj, returned from Saudi Arabia on May 24, five months after she had gone to the kingdom for work.

“My husband is not accepting me. He asked why I did not send money and why I returned home,” she told this correspondent on June 6.

Sharmeen proceeded to recount harrowing tales of both physical and sexual exploitation at her employers’ homes in Riyadh.

Failing to endure it, she informed the local recruiting agent, who then transferred her to another employer in Jeddah.

Even there the abuses did not end and Sharmeen fled.

Soon police found her with physical injuries and admitted her to a hospital in mid-April. After primary treatment, she was sent to a safe house.

After over a month’s stay there, she was sent home.

She then received treatment for an infection in her sexual organ.

Left by her husband, Sharmeen now lives with her sister.

Her tale is similar to the accounts of other female migrant workers who returned from the Gulf country.

Instead of returning with money that could change their fate, they came back with shocking tales of abuse.

Almost of all of them left their homes and loved ones for a distant land, determined to earn money and make a better life for their families back home.

In stark contrast to their aspirations, they experienced exploitation — physical, sexual, psychological and financial.

Some were abandoned by their employers who threw them out of their homes. When police spotted the workers, they were picked up and deported.

Failing to endure the unending abuses, many others decided to return home themselves and took shelter at safe homes managed by the Bangladesh embassy in Riyadh or Jeddah of Saudi Arabia.

When the migrant workers finally returned home empty-handed after months of ordeal, they received no support from the Bangladesh authorities.

In many cases, the families also refused to accept them, owing to the associated stigma. Their hopes and dreams shattered, they are left worse off than before they had left.

At least 4,000 such workers returned to Bangladesh last year with many instances of it this year as well, according to Brac estimates.

Dulshan, 37, of Chuadanga, returned home empty-handed mid-March this year after seven months of work in Riyadh. She faced non-payment, 18 to 20 hours of daily work and physical torture, all of which forced her to flee.

With savings from earlier job stints in Jordan and Dubai, she bought a three-decimal land and dreamt of building a house there with what she earned in Saudi Arabia.

“After returning home, I had to take treatment and my elder daughter had to bear the expenses. I am now staying at her residence and unable to pay my 10-year old daughter’s educational expenses,” Dulshan said.

Industry insiders say the number of abused women workers in the Middle East is growing as more women go abroad for domestic work.

However, the Bangladesh government does not have any data on how many women are returning home after facing abuse.

According to estimates by Brac Migration Programme, every month between 300 to 400 female migrants return from the Middle East, mostly Saudi Arabia, after being tortured.

Shariful Hasan, head of Brac Migration Programme, said it was good that women had labour mobility, but when hundreds of women return home empty-handed — especially after physical, sexual and economic exploitation — authorities need to work rigorously to protect them.

Another worrying trend was of these workers not being accepted by their family.

Health and financial conditions of the abused returnees have already worsened, which is also needed to be taken care of, he said.

“When the migrants send home remittance, authorities appreciate them. But, tragically, when they return home with trauma, nobody is there to support them. This is unfortunate,” Hasan told this correspondent.

“Where would a woman go if she is rejected by her family?” he said, suggesting emergency health and psychological support to them upon their return and then eventually taking up programmes to rehabilitate them.

Professor Tasneem Siddiqui, chair of Refugee and Migratory Movements Research Unit (RMMRU) of Dhaka University, said over 50 percent of the women going abroad as domestic workers were either divorced or deserted by their husbands. Their financial vulnerability may have forced them to go abroad.

“As these women work within the household, it is difficult to ensure their security. It is more so as the Bangladesh embassy doesn’t have a strong monitoring mechanism,” she said.

As they return home in a more vulnerable condition than before, the government should take the initiative to rehabilitate them. The government could engage NGOs and the private sector to employ them or conduct income-generating activities for them, she said.

The Wage Earners’ Welfare Fund, which is established with the contribution of migrant workers, could be used for their rehabilitation, Tasneem said.

Gazi Mohammad Julhas, director general of the Wage Earners’ Welfare Board, which manages the fund, said they manage the safe homes abroad and provide legal support when needed.

There is no rehabilitation or reintegration programme for the abused returnees, he told this correspondent.

“We’ll raise the issue to the Wage Earners’ Welfare Board,” he told this correspondent on June 6.