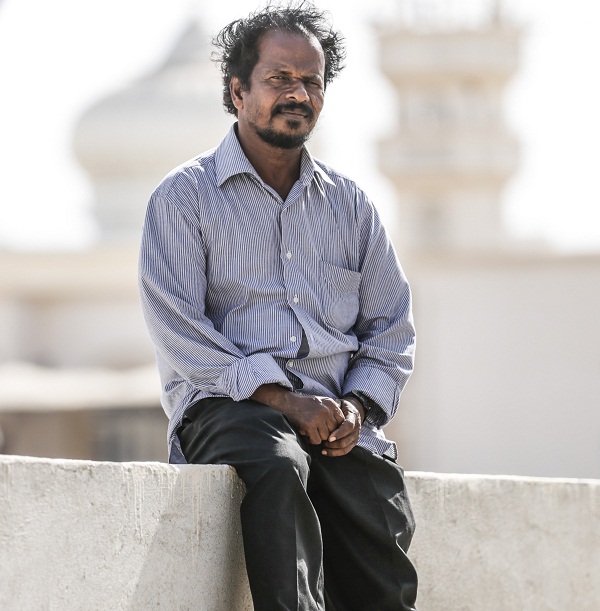 The plight of undocumented Indian workers who migrate to Muscat

“I want to go back to Muscat to earn as I am not getting a good job in my own country,” says 56-year-old Appukuttan who met his family in India after living miserably for 22 years as an undocumented worker in Muscat. All these years, he has missed the big moments of his personal life. He hasn’t seen his children as they grew up, was not present for the last rites of his mother nor has he been able to live with his wife.

Like all other migrant workers, he moved to Muscat in the hope of getting a job but became an undocumented worker. After doing all kinds of menial jobs like driving and rag picking he has now come back to his home in Kerala. Even after spending a desolate time in Muscat, he wants to go back abroad to earn for his family because the financial conditions have not improved but worsened. Currently, he lives with his mother-in-law in a thatched roof house. He says that his wife had to mortgage their home for marrying their daughter nine years ago.

“I don’t have enough money to earn bread and butter for the family. My house was mortgaged by my wife for marrying off our daughter and we are living in my mother-in-law’s home. I don’t want to be a burden on them. I am trying to go back to Muscat as soon as possible to continue driving there. I came to Oman on July 7, 1993, at around 6 pm on an Air India flight. I told my children that I will come back after a year but they were fooled. I blame myself for betraying my family members. I used to see my children growing up through the photos sent by post. I would watch my marriage videos several times to relive those moments,” said Appukuttan.

He is one of the migrant workers who go to Muscat for a well-paying job on a free work visa but eventually become undocumented. “For the first two years, I was documented. I came on a so-called Free Visa,” he added. Free Visa is the visa issued by paying a huge amount to an agent. Under this, the employee need not work for a sponsor. However, the employee has to pay a certain amount monthly as fee to the sponsor for exempting him from working for him. Apukuttan had to pay 20 OMR (approx. Rs 3500) per month to his sponsor which he could not as he was unemployed.

Getting a driving licence in Oman is quite difficult and expensive. Left with no option, he became an illegal driver to earn his living. “The driving tests are difficult. I had done all kinds of menial jobs in Oman but not got a well-paying one. So, I lost a lot of money and then couldn’t pay the monthly amount to my sponsor. Eventually, I didn’t turn up to my sponsor and couldn’t renew my Bataka (local term for residential status). To renew it, a worker has to have approval from his sponsor and moreover, the passport will be under the custody of the sponsor. So, eventually I became undocumented,” said Appukutan.

“I had been a rag picker for many years. Several times, I would go to bed without having even one meal. Sometimes, I wished that I could get at least one cup of tea,” he said.

Amnesty was offered for undocumented workers in 2005, 2007 and again from the end of 2009 to the beginning of 2011. Appukuttan registered his name twice but luck did not favour him. “I used to sit alone along the Azaiba beach often thinking about my family. I have undergone immense trauma during those 22 years of my life,” he said. Amnesty programmes allow workers who have overstayed their visa to return to their country. Talib al-Dhabari, an official with Oman’s Ministry of Manpower, told Al Jazeera in May that amnesties are announced to regulate the labour market as undocumented workers offer to work for lower wages than documented ones.

The amnesty announced by the Oman government in May brought Appukuttan back to his home in India. On May 29 he left Muscat to head back home to Nedungolam, Kerala. His family was happy to see him after so long but the conditions at home remained the same. His son works as an auto driver as they could not afford his education.

Appukutan has been hunting for jobs for the past six months but hasn’t been able to find any. His health has deteriorated as well. “An undocumented worker in Oman does not have access to proper health care. I have relied on God’s grace for my health,” he said. Being a diabetes patient, he cannot work on construction sites or do any jobs requiring physical labour which he has been offered in India. “I don’t want to become a burden on the family and I am not able to earn something here. My friends are making arrangements for my return to Muscat,” he affirmed.

More than 60,000 workers, mostly from the Indian subcontinent, took advantage of the six-month period of amnesty which started in May and ended in October.

According to recent figures from the Ministry of Manpower in Oman, more than 57,000 expatriate workers have ‘absconded’ from their employers since the beginning of this year. “The migrant worker in the hope of getting better pay works for another employer and if he is not able to give money to the sponsor, they declares him absconding to the Ministry of Manpower. Once, he is declared absconding, he is not given his resident card which makes him undocumented,” said Shaji Sebastian, a social activist working for migrant worker’s rights in Muscat for the past 31 years.

To be exact, 57,420 workers have fled their employers in the first six months of 2015, representing around 3% of the 1.8 million expats registered in the country. Migrants form about 44% of the total Omani population.

“The undocumented workers have to wait for the amnesty to go back to their home country because the fine is too heavy. The migrant worker has to pay 40 OMR (approx. Rs 7000) per month for being undocumented and renew their visa. Another option for the expats to leave the destination country is by submitting an application to the Indian Embassy with a medical certificate. The Embassy will forward it to the Ministry of Manpower and the worker might get a chance to go back if the ministry permits him depending on the case,” Sebastian added.

“The case clearly indicates the lacuna in the both countries of origin and destination. Migrants are not informed properly about the plight of undocumented migrants. Recruitment agents charge less for a free visa than the employment visa and there is a parallel labour market which exists in all countries of Gulf to accommodate the undocumented workers and they are paid less and live in precarious conditions. Both the governments should sit and discuss this important issue at the policy level,” said Dr S Irudaya Rajan, Professor, Centre for Development Studies, Kerala.

With inputs from Piyush George, interpreting the language of the interviewee to the author.