By Janak Raj Sapkota
No comments

On June 18, my father rang me from our home in Gitanagar of Chitwan district. “What should we do? Are you there? Get the information on what we need to do, and that too as soon as possible!” He uttered everything in a single breath.

My father has a husky voice but never speaks in a rush. As soon I put down the phone; I felt as if water was running through my veins, not blood.

My first thought was about Dhanbir uncle. I call him uncle because he and my father are close. Not only is his voice soothing, he has a tireless attitude and is always doing new things. He really made an impression on me.

This was a big loss to uncle Dhanbir. I thought to myself, “If there really is a God, he must be very cruel.” 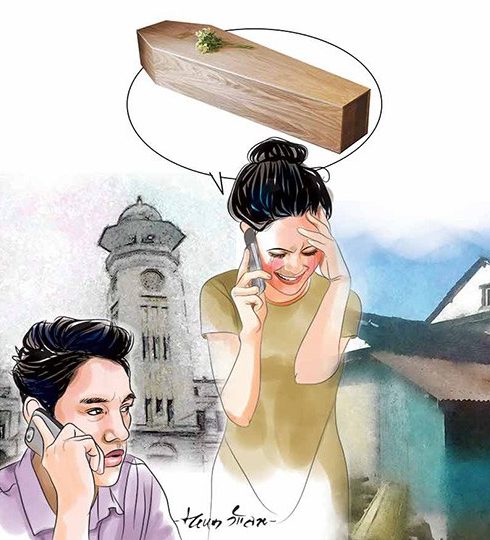 He had only one son, Suraj. Like other youths, Suraj too went to Qatar to earn some money. However, he returned after working in a foreign country did not meet his expectations.

Suraj also went to Russia after colluding with an ‘agent’. He returned home again and left for Saudi to work as driver. Two and a half years back, he was driving his own tempo. The last I heard about Suraj over the phone was the news of his death.

Only God knows how he died. How did it come to that? The only information we received was that he was travelling with a Filipino driver, while giving him driving instructions and showing him directions on the roads. The vehicle met with an accident on the way. The news about his death was true, but we did not want to know more as we were not in a condition to listen to details about the incident.

I rushed to the consular section of the Ministry of Foreign Affairs (MoFA). I spoke to the Director General Gahendra Rajbhandary. He then instructed the officials to bring the dead body to Nepal as soon as possible. During my short time in the office, our conversation went as follows:

“Sir, how many days will it take to bring home the body?

“I can’t say anything right now. It’s very difficult to bring a body from Saudi.”

“It takes almost 45 days on average to bring a body from Saudi. Sometimes, it may come a few days early too.”

“Isn’t there any way to speed up the process?”

“We can’t do anything on this. Everybody asks me the same question, and every time I am left without an answer.”

I informed the family that the process to repatriate the body had been initiated. And the countdown began. My uncle, local civil society leaders, the ward chairperson, family members and other relatives of the deceased used to call me daily and ask me questions like:

“What is the progress?”

“Can’t things be done faster by approaching people in the position of power?”

“It’s been such a long time. Is there really no other way?

I was resigned, “The process has started I’m told. I have visited every possible place to speed it up.”

My colleague Hom Karki, who lived in Qatar for a long time, called Consulate General of Nepal in Jeddah, Saudi Arabia, Rebati Raman Paudel. Another colleague Ram Chandra Adhikari was doing his best contacting the MoFA.

Days passed at a snail’s pace. At the time of Suraj’s death, Eid — a major festival of Muslims – was being observed in all Muslim countries. All the government offices in Saudi were closed. Poudel had said that the related government offices will open only after Eid. “We will start the process after the office opens. Until then, we are helpless.”

Fifteen more days remained for Eid to end. How could his family handle such a long wait? Dad used to call me once in every two days, and would ask about any progress? “Nothing”, I used to reply quietly.

After 15 days, I would get phone calls regularly from my village. My colleague Hom would call Jeddah every alternate day. I would call DG Rajbhandary regularly. But every time his answer would be, “Please don’t worry. We are trying. It should arrive in a few days. It’s not a one-man effort so it takes some time.” I would tell those who called me, “I am trying my best. It may happen in a few days.”

In those desperate days, I remembered those families who do not have any access and no one to speak on their behalf. If their relative dies abroad, what would happen? Who will hear their voice?

We got little information from the embassy and from the consular office. We could only put our faith in God.

The total contribution of remittance in the total gross domestic product (GDP) of the country is almost 32 percent. And yet, this country cannot bring home on time the body of a migrant worker.

Uncle Dhanbir used to call me on phone and say, “I know he is no more. But I would feel good if we can bring the dead body as soon as possible.”

During that time, I was taking part in a workshop ‘Regional Project on South Asian Initiative on Migrant Labour’ in Kathmandu as a Media Fellow of an organization called ‘Panos South Asia’. During the workshop, I asked the participants from different countries, “If a citizen from your country dies in Saudi Arabia, how many days does it take to bring the body home?”

I felt even worse after listening to everybody’s answer. Our politicians make big promises during election campaigns but they are not serious in bringing the bodies of the migrant workers home on time. Don’t they know, every day a total of three Nepalis on average come back to Nepal in a coffin?

The days passed. I thought about Dhanbir uncle every day. Two decades earlier, he was the only mason who used to repair bicycles. That’s why everyone in the village used to call him ‘cyclewale’.

A month passed. The company needed to complete all the documentation work to send the dead body to Nepal. However, the embassy informed us that companies do not prioritize such things, which delayed the process. Finally after weeks we received information that the company had contacted the embassy. After a few days, we got news that one of the necessary documents was ready.

We realized that companies take a long time to prepare the police report, report of Ministry of Labor, insurance clearance, hospital report, among other documents. The embassy does not follow-up on the process frequently fearing that the company may get angry and further delay the process further.

The family members did not want much, including compensation. They just wanted the dead body to be brought to Nepal as soon as possible. Forty days passed and still there was no progress. My colleague Chandra Shekhar sought help from Bharat Poudel, spokesperson of MoFA. But, the matter remained unresolved.

One day, we heard news that representatives of the company would visit the embassy with all the documents. We were told that the body would reach Nepal within a week. I informed uncle Dhanbir. He asked me if a company representative would come and if we had an idea about the exact arrival date.

To answer those questions, I again sought help from my colleague Hom. He relayed the news that the representatives of the company were hit by a storm on the way to the embassy and so they turned back. It was a Thursday. Government offices remain closed on Friday and Saturday in Saudi Arabia. I relayed the news to Uncle. He took a deep breath.

I thought there would be some progress on Sunday. We did not receive any information about the arrival of the body and the airlines. We later found that one document submitted by the company was in Arabic, which resulted in more delay. Uncle was becoming weaker following the death of his son. I cannot put in words how the wait for Suraj’s body, affected uncle Dhanbir, his wife, Suraj’s wife and children.

I went home and met uncle. The pain was visible on his face. He said in a soft voice, “His soul would rest in peace if we can bring the dead body in time.” I could not say anything in reply.

Uncle visited my home early in the morning the next day. He did not express his pain. Before the death of Suraj, uncle had donated Rs 100,000 to the nearby temple to build an iron gate in the name of his dead parents. The gate was ready.  After a long conversation with dad, uncle said that Suraj’s name would be written on the Iron Gate. Uncle in a deep voice said, “Human life is nothing. It will be easy for everyone if there will be a gate in the temple.”

There was no news about the arrival of the body. Uncle had heard that it took time to order a coffin; and the embassy looks for cheap tickets in cargo section to send the dead body back, which also results in delays. “Ask the embassy how much money is needed. I’ll send it from here. Money and wealth do not matter when people die.” I could only try to console him in response.

The Mugling-Narayanghat road section was in poor condition. So the family members came to Kathmandu via Hetauda. Foreign Employment Promotion Board provided a hearse. When we reached the airport, there were a huge number of youths travelling for foreign employment. And I prayed, “God please don’t let this happen to anyone.”

It was almost 10 pm when the body arrived. It was raining outside, which made me feel that even the sky was mourning Suraj’s death.

(Originally published in Nepali language in the Kantipur daily, Nepal.)