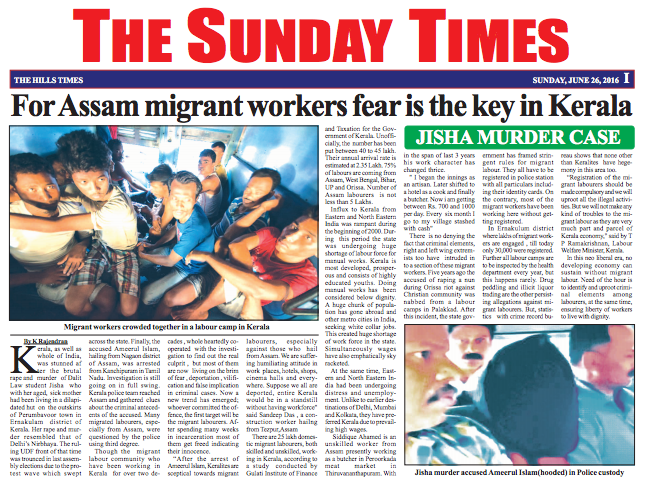 For Assam worker, fear is the key in Kerala

By K Rajendran
No comments

Kerala, as well as whole of India, was stunned after the brutal rape and murder of Dalit Law student Jisha who with her aged, sick mother had been living in a dilapidated hut on the outskirts of Perumbavoor town in Ernakulam district of Kerala. Her rape and murder resembled that of Delhi’s Nirbhaya. The ruling UDF front of that time was trounced in last assembly elections due to the protest wave which swept across the state. Finally, the accused Ameerul Islam, hailing from Nagaon district of Assam, was arrested from Kanchipuram in Tamil Nadu. Investigation is still going on in full swing. Kerala police team reached Assam and gathered clues about the criminal antecedents of the accused. Many migrated labourers, especially from Assam, were questioned by the police using third degree.

Though the migrant labour community who have been working in Kerala for over two decades, whole heartedly cooperated with the investigation to find out the real culprit, but most of them are now living on the brim of fear, deportation, vilification and false implication in criminal cases. Now a new trend has emerged; whoever committed the offence, the first target will be the migrant labourers. After spending many weeks in incarceration most of them get freed indicating their innocence.

“After the arrest of Ameerul Islam, Keralites are sceptical towards migrant. labourers, especially against those who hail from Assam. We are suffering humiliating attitude in work places, hotels, shops, cinema halls and everywhere. Suppose we all are deported, entire Kerala would be in a standstill without having workforce” said Sandeep Das, a construction worker hailng from Tezpur, Assam.

There are 25 lakh domestic migrant labourers, both skilled and unskilled, working in Kerala, according to a study conducted by Gulati Institute of Finance and Taxation for the Government of Kerala. Unofficially, the number has been put between 40 to 45 lakh. Their annual arrival rate is estimated at 2.35 Lakh. 75% of labours are coming from Assam, West Bengal, Bihar, UP and Orissa. Number of Assam labourers is not less than 5 Lakhs.

Influx to Kerala from Eastern and North Eastern India was rampant during the beginning of 2000. During this period the state was undergoing huge shortage of labour force for manual works. Kerala is most developed, prosperous and consists of highly educated youths. Doing manual works has been considered below dignity. A huge chunk of population has gone abroad and other metro cities in India, seeking white collar jobs. This created huge shortage of work force in the state. Simultaneously wages have also emphatically sky racketed.

At the same time, Eastern and North Eastern India had been undergoing distress and unemployment. Unlike to earlier destinations of Delhi, Mumbai and Kolkata, they have preferred Kerala due to prevailing high wages.

Siddique Ahamed is an unskilled worker from Assam presently working as a butcher in Peroorkada meat market in Thiruvananthapuram. With in the span of last 3 years his work character has changed thrice.

“I began the innings as an artisan. Later shifted to a hotel as a cook and finally a butcher. Now i am getting between Rs. 700 and 1000 per day. Every six month I go to my village stashed with cash.”

There is no denying the fact that criminal elements, right and left wing extremists too have intruded in to a section of these migrant workers. Five years ago the accused of raping a nun during Orissa riot against Christian community was nabbed from a labour camps in Palakkad. After this incident, the state government has framed stringent rules for migrant labour. They all have to be registered in police station with all particulars including their identity cards. On the contrary, most of the migrant workers have been working here without getting registered.

In Ernakulum district where lakhs of migrant workers are engaged, till today only 30,000 were registered. Further all labour camps are to be inspected by the health department every year, but this happens rarely. Drug peddling and illicit liquor trading are the other persisting allegations against migrant labourers. But, statistics with crime record bureau shows that none other than Keralites have hegemony in this area too.

“Registration of the migrant labourers should be made compulsory and we will uproot all the illegal activities. But we will not make any kind of troubles to the migrant labour as they are very much part and parcel of Kerala economy,” said by T P Ramakrishnan, Labour Welfare Minister, Kerala.

In this neo liberal era, no developing economy can sustain without migrant labour. Need of the hour is to identify and uproot criminal elements among labourers, at the same time, ensuring liberty of workers to live with dignity.

(Originally published in The Sunday Times, a supplement of The Hill Times, India)