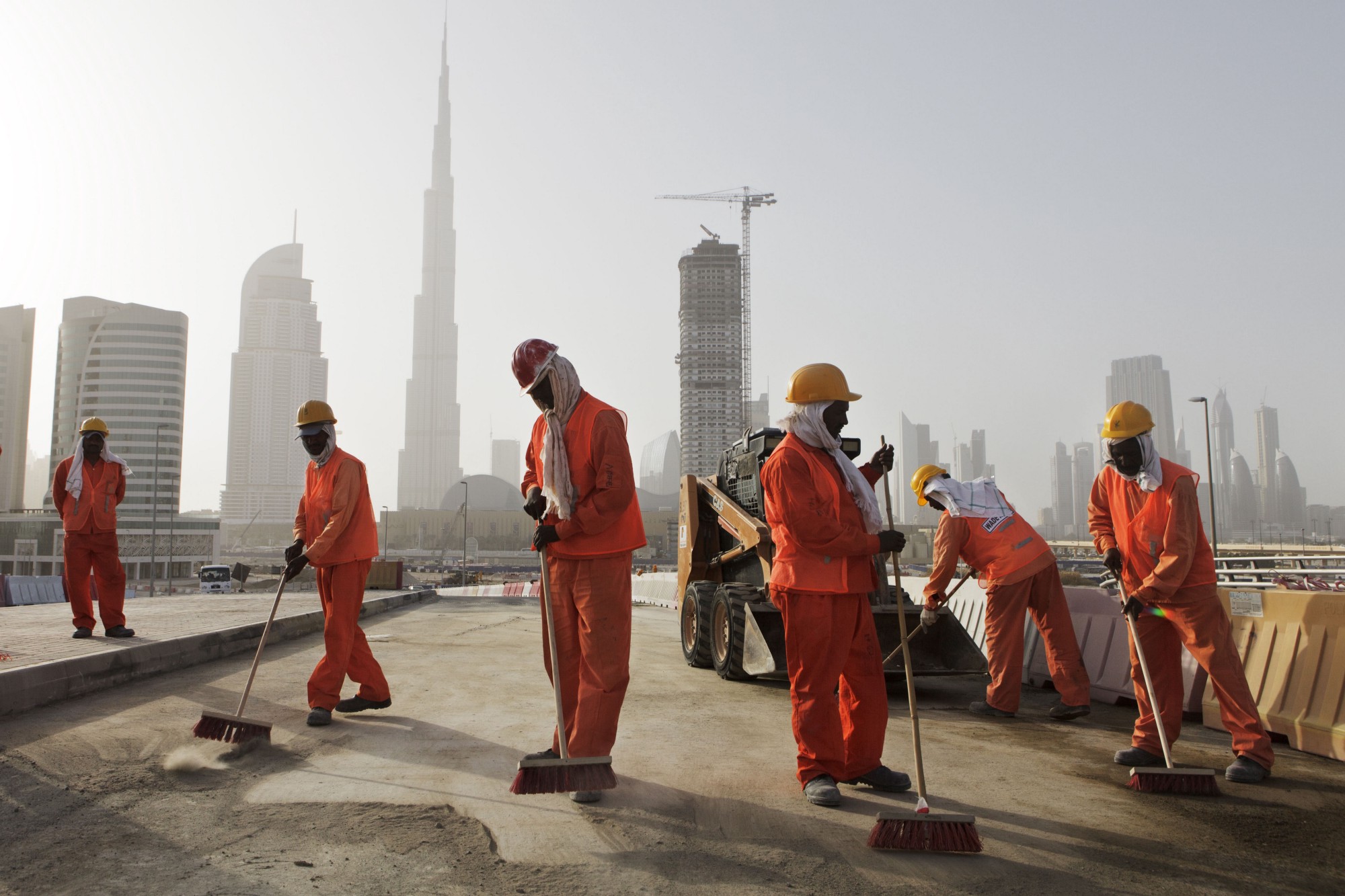 In the Middle East, Being HIV Positive Is Enough to Deport You

When shop-owner Nazir Masih left Pakistan in the late 1970s to try his luck in the oil-rich city of Abu Dhabi, he did not imagine a future of detention and deportation.

Like millions of South Asian laborers in the United Arab Emirates, Masih had a wife and children who depended on his single income to scrape by in Pakistan’s lagging economy.

After Masih learned that he had contracted HIV during a medical screening for a visa renewal in 1990, the United Arab Emirates said it reserved the right to deport him. When Masih arrived home to Pakistan, he was greeted with a shock: his face and HIV status were circulating in the local media, dragging him into public notoriety. Labeled Pakistan’s “first” HIV patient, Masih endured immediate backlash and ostracism — the poster child of HIV/AIDS at a time when few understood the disease’s meaning or its method of transmission. His homecoming in Pakistan, normally marked by celebratory gift-giving and sumptuous feasts, was now marred by a scandal.

Under the laws of many GCC (Gulf Cooperation Council) countries, contracting communicable diseases like HIV/AIDS or Hepatitis C is sufficient grounds for deportation — even if the individual possesses a valid work permit. For many migrants, this adds yet another threat to an already precarious work situation in which employers have undue control. The Gulf’s labor sponsorship program, known as kafala, has drawn the ire of human rights groups and has even prompted an investigation from the International Labor Organization. Countries like Qatar face allegations of “forced labor” for crimes ranging from wage theft to passport confiscation, and the UAE has likewise come under fire from reports that millions of its laborers are vulnerable to exploitation and abuse under the kafala system.

GCC countries, for the most part, defend their strict health prerequisites on migrant laborers. “One of the requirements for the renewal of residency permits for non-Emiratis living in the UAE is being healthy, fit, and free of contagious diseases,” an official from the UAE government told me over email. “In case a worker is suffering from a contagious disease, including AIDS, he will not receive a certificate of medical fitness.”

Human rights groups, however, maintain that this policy is detrimental to public health and wider labor force productivity. “HIV-positive status is not a legitimate reason for denying someone access to a country or for deporting them,” said Diederik Lohman, Human Rights Watch’s interim health director. “A key concern would be their access to anti-retroviral and other appropriate medical treatment. While availability of such treatment has increased significantly in recent years, it is still not available everywhere and to everyone who needs it. Thus, deportation could put someone’s life at risk.”

Of course, GCC countries are not alone in viewing migrant workers as a potential health threat. The United States only removed travel restrictions on HIV in January 2010. Previously, travelers with communicable diseases were required to obtain a waiver of admissibility to enter the country.

While Gulf countries are not alone in treating communicable diseases as an international liability, they possess some of the most stringent regulations against migrant workers.

The United Arab Emirates, for example, requires that anyone applying to reside or work in the country must receive HIV screening, and bans touristsfrom carrying anti-retroviral drugs into the country. Likewise, foreign nationals in Saudi Arabia are required to take an HIV test upon entry. In neighboring Bahrain, a positive HIV/AIDS test results in immediate deportation. Moreover, HIV/AIDS is not the only disease that can cost a migrant worker his job; countries like the UAE require mandatory testing for diseases like tuberculosis, syphilis, and Hepatitis B and C. Food industry employees, salon workers, and domestic workers all submit compulsory pregnancy tests to ensure “fitness” to perform their work duties.

Whether such scrutiny of migrant workers is warranted is debatable. In Pakistan, migrant workers are not the group at highest risk of contracting HIV/AIDS; the highest prevalence rates exist among sex workers, transgender individuals, and injection drug users. Regardless, they are seen as a population that plays a critical role in transmission. Nazir Masih’s status as the “first” HIV/AIDS patient in Pakistan is difficult to prove, but testifies to the notion that migrant workers are implicated in the transmission process. Often, migrants are seen as a “bridge group” transmitting HIV from one country to the next, engaging in high-risk behaviors such as unprotected sex, engagement with sex workers, and other forms of casual sexual contact. Although it is difficult to assess the degree to which migrant workers expose themselves to a higher risk of HIV while abroad, there is an perception of risky sexual behavior. Indeed, when workers repatriate to their home countries, the fear is high that they will spread the disease into the national population.

But by criminalizing HIV-positive status, many Gulf states reduce the likelihood that foreign workers will volunteer information about their health status, for fear of jeopardizing employment prospects.

Employers are legally required to terminate contracts of ill migrant workers, and healthcare providers may forward information to immigration officers who will mandate removal from the country. Such reticence often prolongs lack of treatment or even acknowledgment of the disease, which can produce poor health outcomes for the worker and unleash negative consequences for close family members.

A 2010 People Living with HIV Stigma Index found that Pakistani patients faced discrimination in employment, religious practice, and family engagement. The same survey highlighted that a third of people interviewed were denied access to care in the last year, and another third were physically assaulted because of their HIV status.

Indeed, it is also not uncommon to find health care professionals passing moral judgment about their patients. “Some of the doctors handling HIV patients wear masks and some have been noted to have made… statements like, ‘HIV is a punishment from God for sinners’ (gunahon ki saza),” declared one report submitted to Pakistan’s National AIDS Control Program looking at the treatment of HIV-positive individuals in the country.

There is one benefit, however: the GCC’s strict screening can mean that some workers confront the disease at an earlier stage. In 2004, Ghulam Abbas took a job as a mechanic in the UAE to improve his eligibility for marriage in Pakistan, where his scant earnings pushed wedlock out of sight. In the Middle East, his wages were 5,200 dirham (about $1,400) per month, and his largest expense was the 500 dirham (around $136) he paid for the rent he shared with three other Pakistani workers. Like millions of low-wage laborers toiling in the Gulf, the money he wasn’t saving for marriage went to his family back in Pakistan, which relied on his remittance paychecks to survive. But even after Abbas married in 2007 and fathered two children, he hungered to earn more money, and so returned to the UAE to continue collecting paychecks.

But this time, during a routine medical screening, the doctors detected Hepatitis C. “If they hear the medical is clear, OK, you get a visa,” he later said about the process. “If not, vaapas, you go back.” Abbas spent fifteen days in UAE immigration detention until he was deported back to Pakistan.

Abbas’ deportation provided him a clear employment imperative to learn about his health status and obtain the medical care he needed. “If I wasn’t applying for a visa renewal, I never would have known [that I had Hepatitis],” he said. “I was weak and just kept popping [pain killers].”

Of course, Abbas’ wages as a security guard in Pakistan are meager compared to his previous earnings in the UAE. And whether or not GCC states choose to remove their health restrictions, the reality is that workers in Abbas’ position will continue to be driven there to seek out better wages. Given that these countries have dragged their feet on even the basic reform of their labor laws, however, it seems likely that their health policies will remain yet another burden on the precarious migrants who sustain their economies.

This article originally appeared in The Development Set.