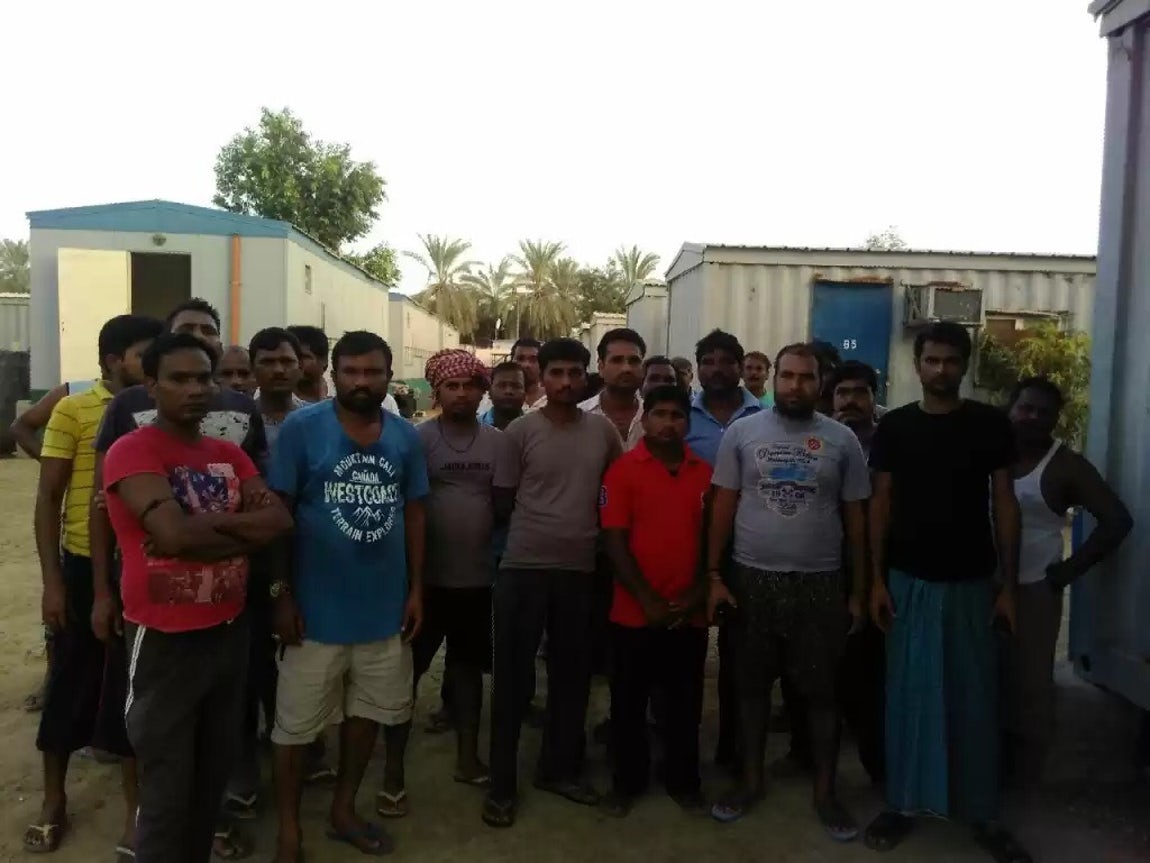 ‘No Food, No Pay’: 800 Indian Workers Stranded in Oman Tell All

After the 5 rials (around Rs 800) given by the Indian embassy on Tuesday to meet emergencies exhausts, we will be again in the same situation. No money even for emergencies. Uncertainty on what to do is haunting us a lot.

These were the words of around 800 Indian workers who are stranded in an industrial town in Oman, without proper food, drinking water, shelter and valid work permit cards for the last few weeks.

“We were not even having proper food for the last few weeks. It was stale food we were getting. There was no money to buy some drinking water too… We thought that we will die here,” a worker said.

“Now, the embassy has given us a little money. But after that what…,” the worker added.

Additionally, majority of the workers don’t possess a valid work permit visa as the company has failed to renew it on time.

Staying in Oman without a valid work permit visa is a punishable offence and a fine has to be paid by the company or worker at the time of exit from Oman.

The Indian workers were left in lurch by the company management by not providing salary for the last five months and according to the workers, the top officials of the company are Indians and it is their mismanagement which led to this situation.

Following the crisis, the workers had filed a complaint with the Indian embassy in Oman on 2 August and also with Oman’s manpower department.

Miseries of the Stranded Workers

“Now, the embassy and Oman government have put forward three options. One is to get a no objection certificate from the employer and return to India. The second is to get a local release and find a new job in Oman itself and third is to stay back and pursue the case on personal capacity,” a worker said.

“In all three cases, we have been told to give a power of attorney to one of the Indian embassy panel lawyers to fight the pending salary and other benefits’ case,” the worker added. In Oman, migrant workers need a no-objection certificate to change the employer.

“The proposals look fine at this moment. But we are worried. We have to fight a case and wait to get the money we have worked hard for. Isn’t this unfair,” a worker asked.

Another worker said that authorities are ready to ‘airlift’ us.

“But what about our pending salaries. A case is there, but we don’t know when we are going to get it,” the worker added.

According to workers, they landed in this trouble due the company’s mismanagement.

In addition to the Indian workers, there are a few number of Asian and Arab workers too stranded in the company.

“In all, there are 900 workers stranded,” a worker said adding that families back home are struggling a lot.

The first casualty of such measures were blue-collar migrant workers.

Companies who are not getting fresh projects and funds released on time left their workers in lurch without payment, food and proper shelter.

Recently, Oman’s Central Bank also revealed that migrant remittances through money transfer houses showed a decline of 6.5 percent in 2016, as compared to 2015 in Oman.

After crossing the four billion mark in 2015, about 4.2 billion rials were remitted overseas that year. The number fell to 3.95 billion rials in 2016.

Gravity of the Situation

On Tuesday, the Indian embassy in Oman tweeted that their officer is at the site and are doing their best to resolve the crisis.

1/2 In matter related to around 800 workers and staff of a company in Sohar, Embassy has been working with Ministry of Power to resolve it.

2/2. The Embassy has been in daily contact with workers. Embassy’s Officer is at the site. All feasible solutions are being explored.

Meanwhile, another worker said that as the company has not renewed their labour cards on time, many have become undocumented.

If an undocumented migrant worker has to exit from Oman, he has to pay fine for overstaying without proper valid residence and work permit documents.

“There are many without proper work permit cards. Who will pay their fines if they have to exit,” another worker asked.

According to latest statistics, there are around 7,00,000 Indians working in Oman. Majority of the workers are low paid workers in the construction sector, mainly migrating from Tamil Nadu, Orissa, Andhra Pradesh, Karnataka, Uttar Pradesh, Bihar and Punjab.

According to a document possessed through Right to Information Act from the Indian embassy in Muscat, till 15 July this year, the embassy has received 1,240 labour complaints already.

‘Workers Should Not be Left in Lurch’: Trade Unionists

A trade unionist in Oman said that companies should not take the workers’ payment lightly.

Rita Samuel, an Indian social worker in Oman, said that such cases are popping up in Oman as the companies are struggling due to low oil prices.

“Like in other Gulf countries, Oman is also not in a good shape as oil prices low. The government itself has cut the spending to overcome the low oil price crisis which is directly hitting the construction sector and workers,” Rita said.

However, Jose Chacko, a financial analyst in Muscat, said that the situation is bettering.

Quoting official statistics, Jose said that Oman’s budget deficit has decreased by 20 per cent in the first five months of 2017, mainly due to higher oil revenues as crude prices remained significantly up during January – May period against the same period of last year.

He added: “The government’s total revenue in the first five months this year rose to 19.2 percent to 3.32 billion rials. Helped by higher oil prices compared to last year, net oil revenue rose 37.3 percent to 1.76 billion rials from 1.28 billion rials a year ago.”

Oman’s 2017 budget is based on an oil price assumption of US$45 per barrel for the year. The average price at which Oman sold its crude stood at US$51.6 a barrel during the first five months of 2017, which is 51 per cent higher from average oil price of US$34.2 a barrel in the same period of 2016.

(Originally published in The Quint.)