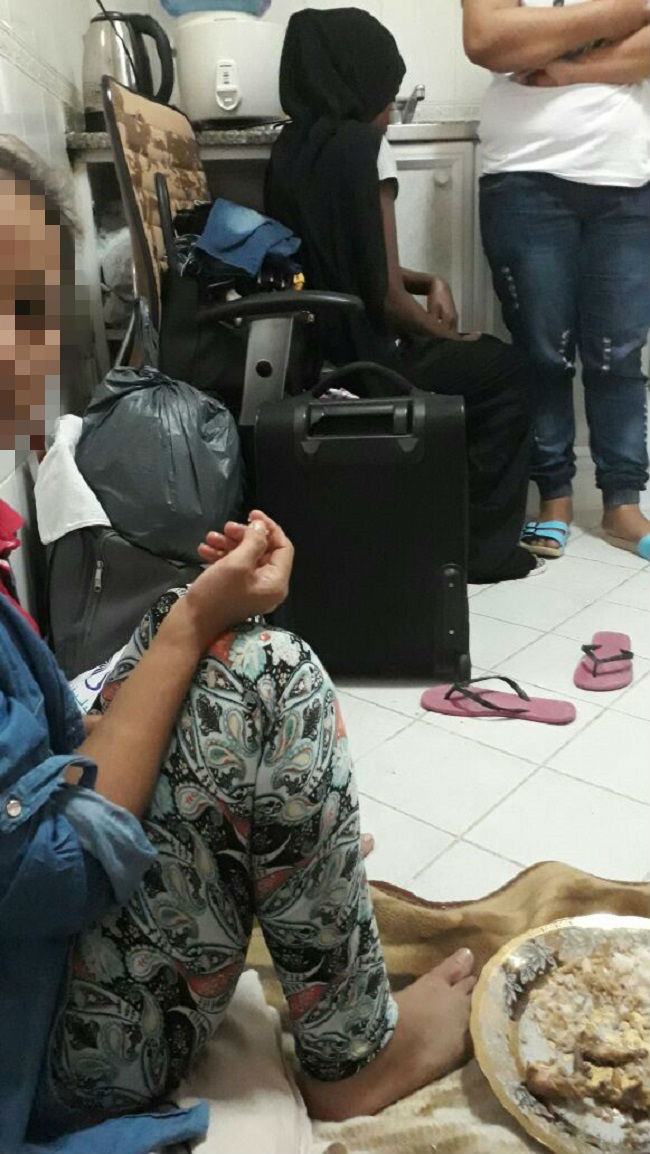 Sameera wants to return: In 6 audio clips, the story of an Indian worker trapped in Abu Dhabi

By Rohini Mohan
No comments

A 27-year-old domestic worker, Sameera*, from Bengaluru, is stuck in Abu Dhabi after she escaped from an employer who is said to have been unbearably exploitative. On August 3, she somehow escaped the house, and reached the Embassy of India, UAE, Abu Dhabi.

But when officials there turned her away, she was caught by her recruiting agency. They locked her in a kitchen with four other women workers from the Philippines, Ethiopia and Indonesia.

Beaten, verbally abused and kept on camera surveillance for five days, the women were desperate to return home. Their only hope was a mobile phone Sameera had hidden in her handbag. From this, she sent a flurry of frantic voice messages on Whatsapp to two friends in Bengaluru – lawyer Darshana Mitra and social worker Kaveri Medappa.

This reporter was also in touch with Sameera on August 8. Here is a picture she sent on Whatsapp of the women (cropped to protect identity) as they ate their first meal in two days.

In this voice message, the Indian worker explains where she is, and what she sees around her.

“We are locked in a kitchen. The office has a camera outside. We tried many times to escape, but couldn’t. Whenever we go near the door, the camera shouts ‘Don’t run. Don’t run.’ I’ve been shut here for many days. We are four women now. The women in the photo – they also don’t want to go back to their employer. There was another [Filipina] woman. They forcibly sent her to an employer yesterday. She was crying. She was sick…. I can tell you this address.”

Sameera, a resident of Bengaluru for over eight years, went to Abu Dhabi over two months ago. She’s estranged from her husband, and supports an elderly mother in West Bengal. Under severe financial stress, she approached a travel agent from National Tours and Travels, in Frazer Town, Bengaluru, who sent her to Abu Dhabi to work as a cook.

The Bengaluru agent had links with Kawader Labour Recruitment, in Abu Dhabi. Kawader placed her with an employer, who overworked and verbally abused her. In this voice clip, Sameera explains why she left the employer, and doesn’t want to go back:

“My first employer was very bad. The day I came here, I wanted to go back the same day. But my [next] sponsor made me work 15 hours, and I used to sleep for 4 hours. There was a lot of work, and I got no time to even eat. I was suffering lots of problems. They didn’t give me my salary on time, or fully. I haven’t been paid in full even now. That madam would keep shouting, shouting. How much can I endure?”

Since she wanted to leave, Darshana contacted the Embassy, and they redirected her to the Indian Workers Resource Centre. “The IWRC staff told us, ‘ask her to leave the house and come to the embassy, we will take it from there.’ This is why she ran away,” says Darshana.

When she reached the embassy on August 3, though, officials there told Sameera to “come back after two days,” since the embassy would be closed for the next two days.

“The embassy people are calling me now, but when I ran and went to them, they sent me away. It’s because of them that I’m locked here now.”

None of these migrant workers have their passports with them. At least 1,46,000 female migrant domestic workers from countries such as the Philippines, Indonesia, India, Bangladesh, Sri Lanka, Nepal, and Ethiopia work in the UAE. In 2002, the UAE Ministry of Interior made detaining an employee’s passport explicitly illegal (punishable with a fine of Dh 20,000 or three years jail), but employers widely continue the old practise of controlling the workers’ mobility.

While scared herself, Sameera seemed more anxious about the other women. At 10.15am, she sent this picture of a young Indonesian woman, who Sameera said had not eaten, and had gone worryingly quiet. “She seems to be losing her mind in fear.” Some of the other women also sent voice messages through the Indian’s phone, begging for help. Here, a Filipina worker appeals for help:

To aid rescuers to find them, the women tried to zero in on their location. Sameera sent a Whatsapp pin of an office in Dalma Street, Abu Dhabi. Below, she describes what she saw outside the building – “near Neha beauty parlour, exactly opposite Zoom Mart”:

Unfortunately, just before noon, the staff discovered the hidden mobile. This was the last Whatsapp message at 11.40am, August 8:

“They’re asking for my phone. I’m going to do a clear chat [last word truncated].”

Since then, the workers have been hard to reach. Based on the address in the voice clip, some local Indian-origin volunteers tried to rescue the women, but the Kawader agency staff mounted a fight. Seeing the door open, the women rushed into the elevator, but the staff pulled them back and locked them in again.

The rescue attempt was unsuccessful, and worse, the women’s efforts to escape were exposed.

Aware that the workers were now more vulnerable than ever, a handful of volunteers and migrant rights activists from across the world sent several complaints and requests via email and phone to the Embassy of India in Abu Dhabi and the Ministry of External Affairs. Officially, these have been met with cold silence or statements like “we are helpless.”

Appallingly, an Indian official in UAE asked Darshana to “see the issue from the recruiting agency’s point of view too – they’ve taken money from the employer, they can’t just send the worker back home.” A few other officials, however, were more sympathetic, and reportedly promised to help by contacting Abu Dhabi local authorities in their personal capacity.

As these efforts continued, after sundown on August 8, the Abu Dhabi police went to the agency and brought the women out. On August 9, sources at the Embassy believed the women were arrested. It wasn’t clear who called the police, or what the workers could have been arrested for. Sameera made a brief call to Darshana Mitra on the morning of August 9, saying that she was in the “CID police station.”

Later that day, a highly placed source in the Embassy of India, UAE, said he was coordinating with the Philippines Embassy to find if there are any case[s] charged.

The UAE’s restrictive visa sponsorship system, known as kafala, and weak labour protection norms leave migrant domestic workers often underpaid, overworked and abused. Not able to quit even exploitative jobs without the employer’s consent, they suffer alone, trapped behind closed doors of private homes. This is why many have to “run away” to simply quit a job. A significant number are caught and reemployed under worse conditions, but still others lose their limbs or lives in the process.

Tom Wilson Hubertson, a legal adviser for Migrant Forum in Asia, a network of migrant rights advocates, says that even when a domestic worker manages to escape, she can be prone to arrest for being undocumented (since they don’t have their passports), for violating her job contract (and thereby losing her sponsor visa), or in trumped-up cases like theft.

“This is the reality for thousands of Indian domestic workers working in the Gulf,” says Hubertson. “To repatriate and send a worker home, it takes a whole movement of activists, volunteers, and most importantly, embassy officials.”

Sameera shouldn’t have had to put herself under grave risk to escape a bad employer. And when unfair labour laws forced her to, her return to India should have begun safely, on the very day she reached the embassy.

Today, it’s unclear how Sameera’s arrest will pan out, and how the women workers can be freed. It is now up to the Embassy of India, UAE, and the Indian Ministry of External Affairs to get Sameera home.

UPDATE: To the relief of Sameera’s friends, on Thursday morning, Suresh Kumar M, First Secretary (Political), Embassy of India, Abu Dhabi, clarified that she “was not arrested as we thought originally.” In an email to this reporter, he wrote, “[Sameera] was rescued by Abu Dhabi Police and Embassy officials went to the Police Station and saw her yesterday. We are seeking consular access and are providing her with all possible help for her to return to India as soon as possible.”

(Originally published in The News Minute.)