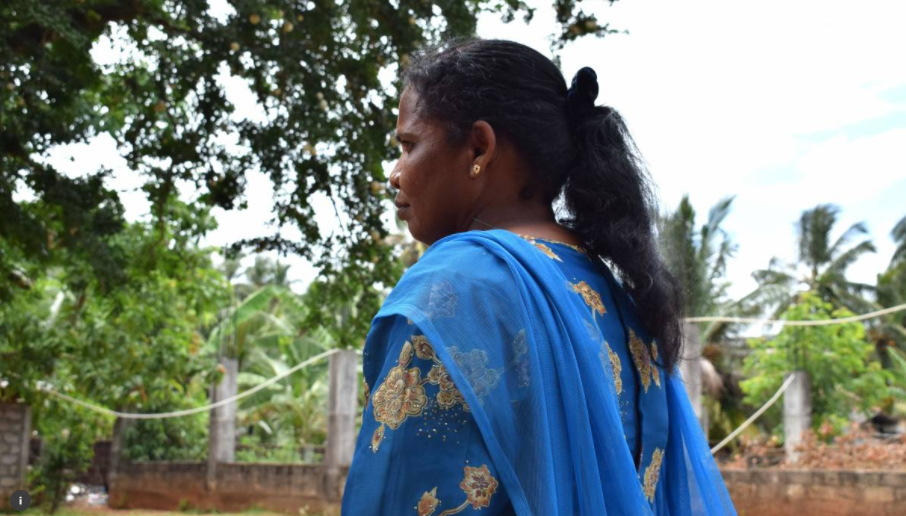 When Nathkulasinham Nesemalhar took a flight from Colombo to Muscat in March she believed the boarding pass she clutched in her hand was her golden ticket to a better life after decades of war where she lost everything, including her husband.

The 54-year-old widow from Sri Lanka’s former war zone had been promised work as a maid for an affluent family in the Gulf state of Oman. She would get a nice room, decent working hours and 30,000 rupees ($150) a month – enough to pay off her debts.

But Nesemalhar’s dream soon turned into a nightmare. She found herself enslaved with other women in a dimly-lit room with no ventilation, miles from Muscat. She was taken out daily, sent to different homes to clean, and then locked up again at night.

“There were 15 of us. We never got paid. Finally we got back home when the Sri Lankan government intervened,” said the mother-of-three whose husband went missing in 2001.

“People who have not gone through a conflict will not understand how difficult it is to take care of young children on your own. We suffered during the war and we are suffering now,” she said at her home in Jaffna in Sri Lanka’s Northern Province.

The abuse of Asian and African maids in Middle Eastern countries such as Saudi Arabia, Qatar, Bahrain and Oman is commonly reported.

But Nesemalhar’s story highlights a rising yet unacknowledged trend in the Indian Ocean island where a lack of opportunities for thousands of war widows is making them easy prey for traffickers who sell them as slaves overseas.

According to the Sri Lanka Bureau of Foreign Employment, over 1,000 women from the north – many from female headed homes – sought jobs as maids in Gulf nations in 2015 and 2016. Central Bank data shows only 300 went in 2011.

“The numbers are insignificant compared to the over 100,000 Sri Lankan women who leave annually as domestic workers,” said S. Senthurajah, executive director of Social Organizations Networking for Development, a Jaffna-based charity.

“But given that hardly anyone from the north left as domestic workers a few years back, it is an important number. It’s because they cannot make ends meet.”

Sri Lanka is in its eighth year of peace after a 26-year conflict which ended with the defeat of the separatist Tamil Tigers in 2009.

More than 100,000 died, around 65,000 remain missing and millions were uprooted from their homes during the violence, concentrated mainly in the island’s ethnic Tamil majority Eastern and Northern Provinces.

Yet despite the government pumping billions of dollars into infrastructure development in the north, little has been done for the estimated 90,000 women who lost their husbands, fathers and brothers during the conflict, say activists.

The Northern Province is one of the country’s most under-developed provinces in terms of gender parity.

Female workforce participation is 21 percent compared to the national average of 35 percent, government data shows, while the maternal mortality rate is 30 percent against 22 percent nationally.

The United Nations estimates more than a fifth of the 250,000 households in the north are headed by women like Nesemalhar – war widows who have become breadwinners.

With no jobs and few opportunities to earn a livelihood, these women – many of whom look after up to four people – are being forced to borrow from money lenders, leaving them open to exploitation by trafficking networks.

“They are the most vulnerable and easiest to convince to take up these offers,” said Ravindra De Silva, head of the charity Association for Friendship and Love, which worked with authorities to rescue Nesemalhar.

Recruitment agencies employ local villagers who are known and trusted in their communities and who scout for indebted and impoverished women.

They promise decent jobs, generous salaries and paint an alluring picture of a good life in a wealthy nation. All the women have to do is sign a basic contract and fill in some paperwork – but they are often unaware of any terms and conditions.

This amounts to a contract of bonded labour, where the recruitment agencies – which are government registered – dupe victims into believing no fees need to be paid, said Da Silva.

The agency that sent Nesemalhar to Oman, for example, refused to repatriate her saying the employer paid 300,000 rupees ($1,955) for her and she must refund that in order to be allowed to return home.

Nesemalhar was luckier than most. After being held for several weeks, she was rescued when the Sri Lankan authorities found out about her plight through the relative of another women enslaved with her.

But many victims are not rescued or cannot pay the money to return home and can be exploited and abused for years. In most cases, there is no prosecution of the recruitment agents or employers.

Only a handful of cases have make headlines.

In 2013, a Sri Lankan maid was beheaded in Saudi Arabia, accused of negligence after a child in her care died. In 2010, doctors found a 50-year-old woman rescued from Saudi Arabia had been burned with a hot iron and had pieces of metal embedded into her skin.

Activists say that while reports of physical and mental abuse are common, women are reluctant to speak about sexual abuse and rape, fearing shame and stigma.

Officials say they cannot cancel the registration of recruitment firms and prosecute traffickers or foreign employers as victims do not come forward – often too poor and too traumatised to pursue legal action.

The Sri Lankan authorities say most women go through registered recruitment agencies and complete a 40-day housekeeping course before their departure.

The government only intervenes if they receive a complaint of someone being held against their will.

“In (Nesemalhar’s) case we made sure that we brought these women back, if there are other cases like that, we will look at what we can do,” Thalatha Atukorale, Minister of Foreign Employment, told the Thomson Reuters Foundation.

Atukorale said she was aware poverty in the north was leading to the exploitation of war widows, adding that officials were being extra vigilant for traffickers in the area.

But analysts say survivors of the conflict need much more support to rebuild their lives and earn an income.

“There are lots of little initiatives under way by the government and NGOs and businesses,” said International Crisis Group’s Sri Lanka analyst Alan Keenan.

“But they don’t add up to a coherent or effective response to the desperate situation so many women are facing in the north and east.”

For Nesemalhar, life has worsened since she returned home – so much so that she is considering returning to the Gulf. Her debts are mounting and she faces social stigma in her community who accuse her of being a sex worker in Oman.

“My children say they are ashamed to go out. I can’t go out either because people laugh at me or because I owe them money,” said Nesemalhar. “Only then will I be away from all this and I can make some money and pay off the loans.”