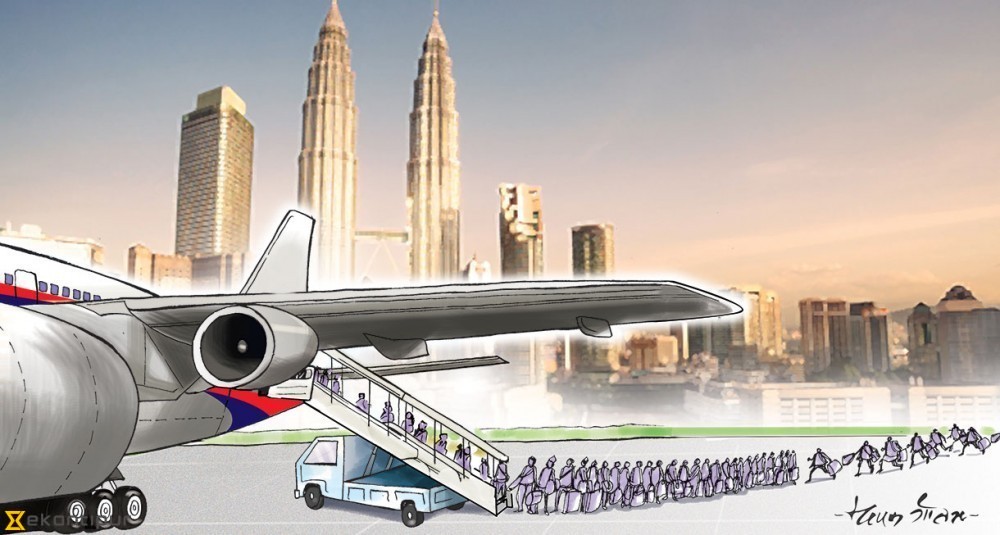 By Janak Raj Sapkota
No comments

Roshan Bhatta looked hopeless during an encounter at the Nepalese embassy in Malaysia which is situated along Jalang Ampang road. Bhatta, an employee at a Rawang based company that produces paper bags, became undocumented after he continued to work in Malaysia without extending his visa after it expired two years ago. Bhatta, a resident of Basundhara-Kathmandu, wanted to return home to meet his sick mother. The process was proving much costlier than he had thought. He had just handed over 2600 ringgit to a ‘middleman’ to process documents to obtain a travel permit. The money that Bhatta paid to acquire the travel document or ‘exit visa’ was a third more than the prescribed amount.

Like Bhatta, a total of 66, 83 Nepalese nationals working without legal status in Malaysia have obtained travel documents since Baishak (April-May), according to data compiled by the Nepalese embassy.

Undocumented workers are required to pay a minimum of 2300 ringgit to secure an exit visa. Besides the air fare, the cost includes 160 ringgit for the travel document, 20 ringgit for photos, a lump sum fine of 400 ringgit to Malaysian immigration and 550 ringgit in service charges that workers are required to pay to the outsourcing company hired by the Malaysian government to process the documents.

“Agents are charging around 400 to 500 ringgit extra from each worker,” said Basnyat, while accepting the failure of the mission to stop exploitation. “The embassy itself has fallen into clutches of agents.”

There has been significant rise in number of undocumented migrants returning home in wake of a nationwide drive by the Malaysian government to get rid of undocumented workers. The Nepalese embassy in Malaysia issued travel permit to 1135 workers in Baishak (mid April to mid May). Similarly, the embassy issued travel documents to 1121 undocumented workers in Jestha (mid May to mid June), 1701 workers in Ashad (mid June to mid July), 1608 workers in Shrawan (mid July to mid August) and 1118 workers until the last week of Ashad (mid August to mid September). The embassy has issued a total of 143000 travel documents in the last three years.

There is a rampant increase in the exploitation of undocumented workers since last year, particularly after the Malaysian government started accepting applications for travel documents through a private company named Haarfase. The outsourcing company, which is based in the same building where the embassy is located, charges 550 ringgit to process the application for travel documents. The unfair ‘service charge’ has increased the economic burden on undocumented workers who are vulnerable to abuse and exploitation. In addition to the service charge paid to Haarfase, workers are compelled to pay unjustified amounts to layers of agents for a range of services like photo shoot, accommodation and air tickets.

Interestingly, little is known about Haarfase or its agents. Officials at the Nepalese embassy in Malaysia said they lack any information on the outsourcing company. With the embassy turning a blind eye to the rampant exploitation, many workers like Bhatta are compelled to forfeit their hard earned money.

Before Haarfase, the Malaysian government had entrusted a local NGO named Cooparasi Immigration to facilitate the process of the return of undocumented migrants. Cooparasi used to charge 1280 Malaysian ringgit from each migrant worker. The Cooparasi unilaterally increased the service charge to 1680 ringgit after a writ petition was filed at Nepal’s Supreme Court demanding legality of the outsourcing service. Following legal issues, the embassy had terminated the agreement with the NGO. Few months later, the Malaysian Home ministry appointed Haarfase to facilitate the return of Nepalese, Cambodian, Indonesian and Vietnamese workers.  Haarfase’s appointment saw numerous agents enter the fray and additional economic burden for the workers.

It is not uncommon for undocumented workers like Bhatta to fall prey to agents due to a host of factors including language barriers, mobility issues and lack of trust towards the embassy. The sluggish service and apathy of the embassy is one reason why workers like Bhatta are inclined to seek services of agents.

In the embassy, around 50 undocumented Nepali workers were preparing to return home. Two of them were Bhatta’s friends. They were paying an agent an exorbitant fee to return home. Most of the workers whom Kantipur spoke to said they had paid between 2300 –   2700 ringgit.

“My mother wants me to return home anyhow. So money is the second priority right now,” said Bhatta.

Purnahang Imbung of Naagi-1 Pachhthar, another Nepalese worker standing in the same queue, had processed his documents through a Nepalese agent named Ashok.  Imbung, who became undocumented 14 months ago after running away from his original employer, said that he wanted to return home.

“I want to return home any way,” said Imbung while declining to comment on agents and fees he had paid out of fear of the agent. The agents were making gestures to their clients, the undocumented workers standing in the queue, not to talk to new people and disclose the amount they had paid.

With neither Malaysia nor Nepal showing enough sincerity to address the problems, the workers are compelled to find agents. Agents are everywhere, in Nepalese restaurants and places where workers usually meet.

Netra KC, who runs a photocopy shop near the embassy, is also an agent. KC was recently released from prison after serving terms for duping workers. He told Kantipur that he charges 2260 to 2360 ringgit to send undocumented workers home.

“Some are charging as much as 5000 ringgit, while many others exploit workers physically and economically. I give a receipt to each of my clients to maintain transparency,” said KC, who compares his work to social service.

It is hard to tell when a worker falls prey to an agent. Since your friend, relative or a co worker can be agent, you might be exploited at any point,” said Neupane.

(Originally published in Nepali language in the Kantipur daily, Nepal.)