It is a city renowned for glitz, glamour and boasts the world’s tallest building. But there’s an ugly side that you won’t read about in its tourist brochures. Dubai’s Burj Khalifa is the world’s tallest building and a popular tourist destination — its army of migrant workers. The workers, who are largely from Pakistan, India, Bangladesh and Nepal, are paid well below the prices charged in the city’s expensive boutiques and glamorous hotels. The migrant workers risk exploitation and are often housed in filthy conditions, with little down time. In short they are the hidden slaves of a rich city.

In mid August 2017 I traveled to UAE with a journalist colleague for a week. We planned the trip meticulously as we wanted to have some insightful stories on Pakistani migrant workers in UAE. During our stay in UAE we visited Dubai, Sharjah, Ajman and Abu Dhabi. We visited many labour camps in these Emirates and met with labourers. In Dubai we went to Sonapur Labour Camp which is a famous place for labourers. Everybody in the city knows about this area which houses residential camps for labourers.  I had heard that migrant workers make up a large majority of Dubai’s private sector staff. While the exact figures are not known, it is estimated that there are three million of these workers in the UAE alone. Domestic workers were particularly vulnerable to abuse as they don’t have the minimal protection afforded by UAE’s labour law.

In a meeting we interviewed workers and witnessed the shocking conditions the men were exposed to. A migrant worker from Shiekhpura Pakistan said that agents in his village had approached him and said he would be paid $580 a month. But in reality they are paid half the amount with the agents taking a $4000 cut in the process. Some of them were in debt and too poor to return home, many worked 12 hour shifts, six days a week.

We saw hundreds of workers stage a protest at a mall. Public protests are banned in the UAE, but angry workers defied the law to demand fair pay for their work at a big shopping Mall in Sharjah.

One worker Abdul Shakoor said he was paid a monthly salary of just $170, well below what was promised to him. Apart from salary issues, workers tearfully told us that companies would hold their passports, trapping them in the UAE. Thousands of workers are living in substandard or squalid conditions elsewhere in the UAE in an apparent breach of the TDIC’s pledge to house them in its model Saadiyat accommodation village. Dozens of workers were deported this year for striking over pay and conditions. Workers decorating the University live in squalid conditions, with 10 men to a room, no free healthcare and some trapped because they have to pay back huge recruitment fees.

A worker who claims he lost his leg while building luxury villas has been forced to live on the top floor of a migrant camp for a year. He only received a prosthetic leg last month and is reliant on the Red Crescent for medical support. His claim for compensation and request for ground-floor accommodation have been rejected. Others workers have to work for nine months to a year just to pay back their recruitment fees. One worker who went on strike over poor wages was kept in his camp and not for three months. He was sent back to Pakistan with 19 others. Minimum labour standards are not respected, there are systematic complaints about poor accommodation and sanitation, salaries and medical services are being withheld. Both experts and the migrants have reported use of excessive police force and situations of forced labour.

Read the complete story in Urdu: 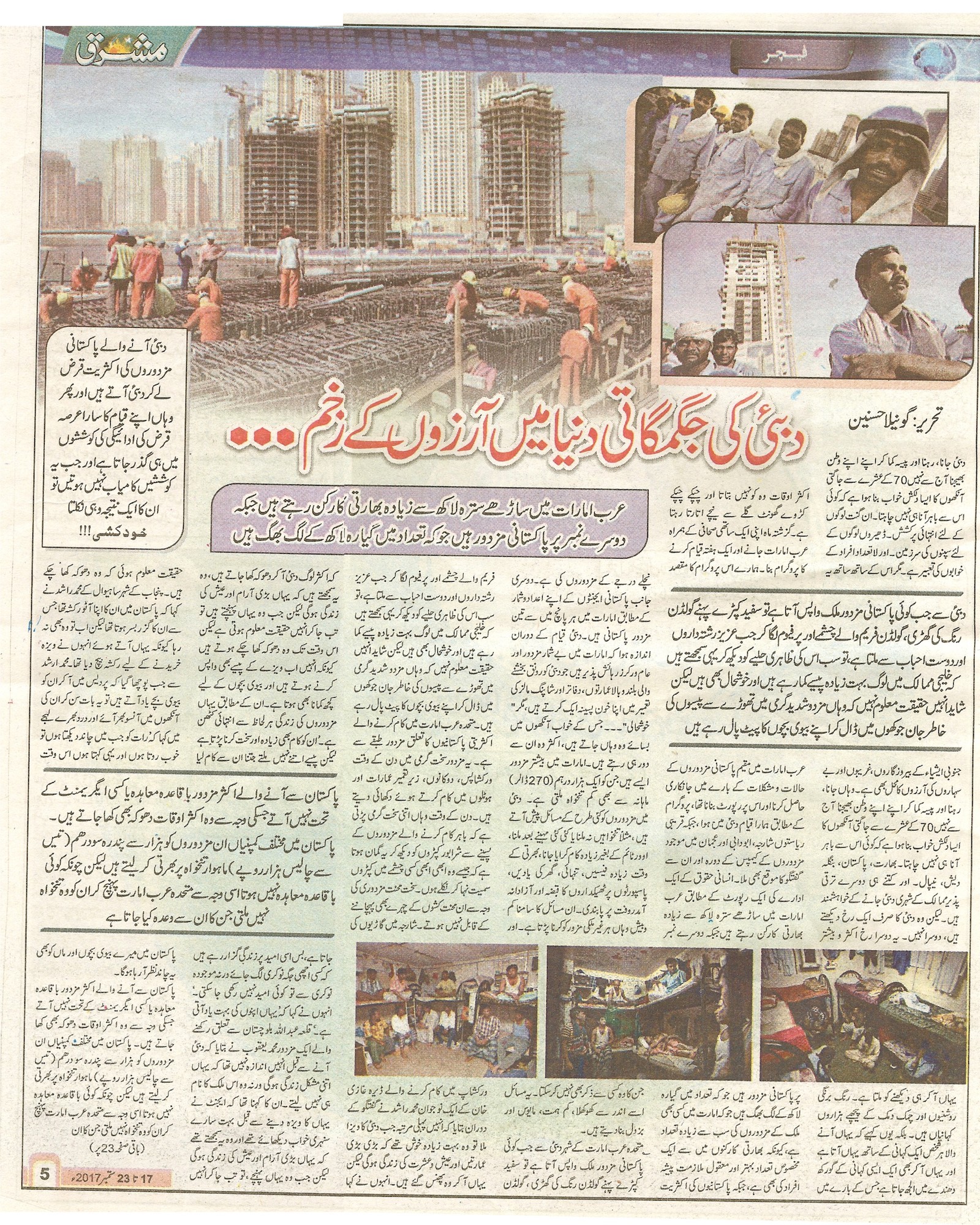 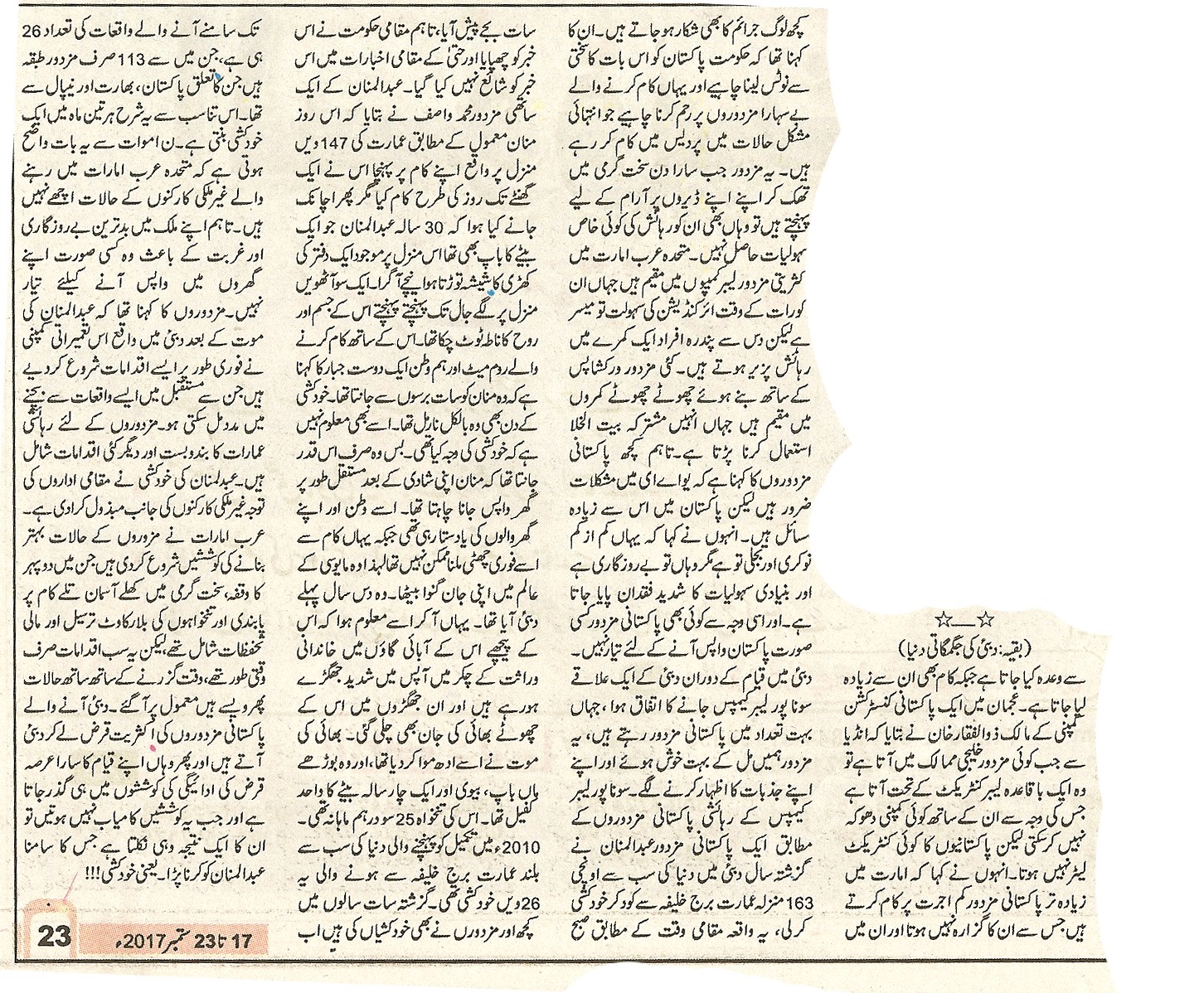